India   All India  06 Oct 2020  A temple where Gandhi is worshipped and a Dalit is priest
India, All India

A temple where Gandhi is worshipped and a Dalit is priest

Called Gandhi Mandir, this temple located in Odisha’s Sambalpur district, has become a favourite place of worship for people of all faiths 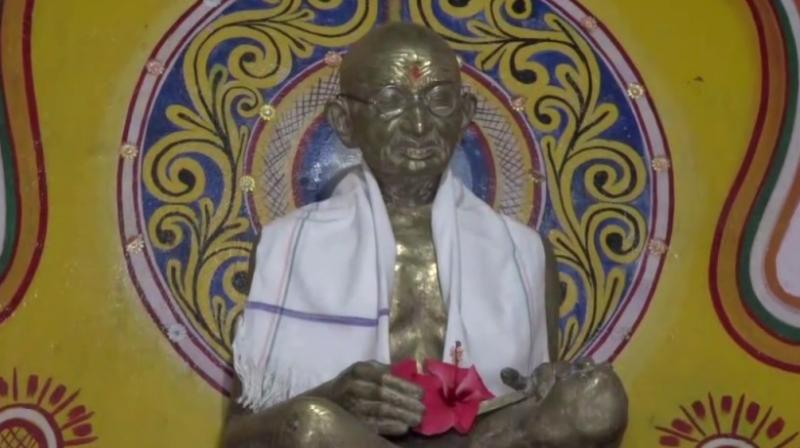 Statue of Gandhi installed in the temple.

Rairakhol: It’s perfectly a temple structure with all geometrical requirements. Like any other temple, it has got a sanctum sanctorum, but the deity placed on it is not Lord Brahma, Vishnu or Maheswar nor any other Hindu god or goddessit is the statue of Mahatma Gandhi, the Father of Nation.

Unlike most of the temples where Brahmins are priests, here a Dalit man performs this role.

Called Gandhi Mandir, this temple located at Rairakhol in Odisha’s Sambalpur district, has become a favourite place of worship for people of all faiths. Preaching humanity and brotherhood, Gandhi Mandir, established in 1972 by a former MLA Abhimanyu Kumbhar, who passed away on July 26 this year, this temple has also turned a place a pilgrimage for people of Odisha, Chhattisgarh, Andhra Pradesh and Jharkhand. Hundreds of people visit this temple everyday to see for themselves the uniqueness of this temple and its rituals.

And what do the devotees or visitors offer the deity?

“Unlike other temples where different sweet dishes are offered to the deities, here the deities offer only basil leaves and flowers to Gandhi as a mark of their respect and sing his favourite song,” says Abhimanyu Chhuria, the priest.

The temple has a story behind its construction.

Abhimanyu Kumbhar, born on March 4, 1928 at Mathapali under Dhanupali police limits in Sambalpur district, had a chance interaction with Mahatma Gandhi during the latter’s visit to the area in 1940s. He was very much impressed with his speech exhorting people to love the dalits.

“Abhimanyu Kumbhar was very much impressed with Mahatma Gandhi and decided to build a temple in his honour. With the cooperation of the local people the temple was built. Not only the local residents but people from other districts and states also visit this place to offer their prayers to Bapuji,” informs Kalia Bag, a local resident.

What is quite shocking is that the temple is now in shambles, much due lack of maintenance. It has developed cracks at some places.

“The temple needs immediate attention for maintenance by the district authorities. It might lose its identity if any further delay is made for its reparation,” says the priest,  Abhimanyu Chhuria.