The RJD had cobbled up an alliance with four political parties with strong EBC, OBC, and minority voter base during the Lok Sabha polls. 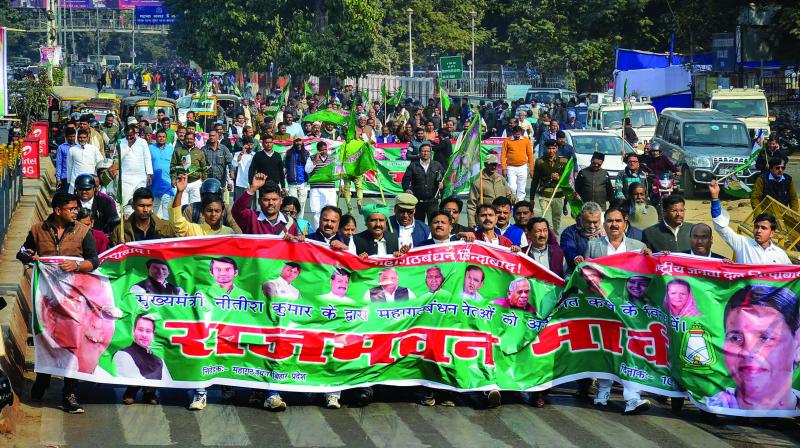 Patna: By-elections in one parliamentary seat and five Assembly seats have heated up the political atmosphere in Bihar. Turmoil in the five-party grand alliance continued despite efforts by a section in the RJD to resolve the thorny issue of seat allocation.

Political experts are of the view that the current scenario in the grand alliance may give an edge to the three-party NDA being led by chief minister Nitish Kumar.

Sources said that RJD’s decision to contest four of the five Assembly seats in Bihar by-elections has created a flutter in the grand alliance, particularly in Jitan Ram Manjhi’s HAM and Congress. HAM leaders in Patna blamed Tejashwi Yadav for trying to break the alliance ahead of polls on the instructions of BJP. HAM insiders also claimed the party is in touch with other like-minded secular forces, including RLSP and VIP and may contest the election in alliance with them.

Though the Congress and the RLSP have not said much about the development, Mukesh Sahani of the VIP recently said that his party would extend support to the HAM and the Congress during the by-elections.

“It seems that the RJD doesn’t need an alliance with secular parties. The situation has compelled us to take a decision to support HAM and other anti – NDA forces during the by-elections,” VIP chief Mukesh Sahani said.

He gave the statement after HAM leaders in Patna met and urged him to create a political alliance in Bihar without RJD’s support.

The RJD had cobbled up an alliance with four political parties with strong EBC, OBC, and minority voter base during the Lok Sabha polls. Former Union minister and RLSP chief Upendra Kushwaha had walked out of the NDA in December last year over seat-sharing differences with BJP national president Amit Shah.

Mr Sahani was also among those who had joined the grand alliance ahead of Lok Sabha polls last year after he failed to convince the BJP leadership for a fair amount of seats.

Sources said Jitan Ram Manjhi is also trying to persuade Upendra Kushwaha and the Congress top leaders to get into an alliance with his party and contest the coming by-elections as well the Bihar Assembly elections which are scheduled in November 2020.

“The grand alliance had won the Araria and Jehanabad seat during the previous by-election thanks to Jitan Ram Manjhi. Our party has already decided to continue its support to the Congress and VIP and those who want to take their own decisions are free to do so. There is no pressure from us,” HAM spokesperson Danish Rizwan told this newspaper.

Jitan Ram Manjhi who is considered a strong Mahadalit leader in Bihar is the only MLA from his party. According to sources, his entry into the grand alliance was scripted by Tejashwi Yadav who has been trying to expand the alliance and also strengthen RJD’s base in Bihar.

The rift in the alliance surfaced after the main Opposition party RJD had announced candidates for Nathnagar, Belhar, Simri Bakhtiyarpur and Daraundha and left the Kishanganj Assembly and Samastipur parliamentary seats for the alliance partner Congress.

Reacting sharply, the RJD refused to withdraw candidates from the four Assembly seats. According to RJD spokesperson Mrityunjay Tiwary, “Party will not withdraw candidates as all the four have been our traditional seats. Besides, the RJD is also largest among all our grand alliance partners so instead of trying to create a fissure, they should sit and work out a strategy to weaken the NDA in Bihar.”

The five Assembly seats going to polls on October 21 fell vacant after the leaders who represented them were elected to the Lok Sabha.

When asked about his reaction on RJD’s decision to contest four Assembly seats, Congress state president Madan Mohan Jha said, “Everyone is trying to enforce their own opinion on alliance partners which is not good. The Congress cannot say anything about the grand alliance at the moment as we are yet to receive instructions from our central leaders on the issue.”