Abujhmad, which has remained un-surveyed by the government of India till date, has total 237 villages. 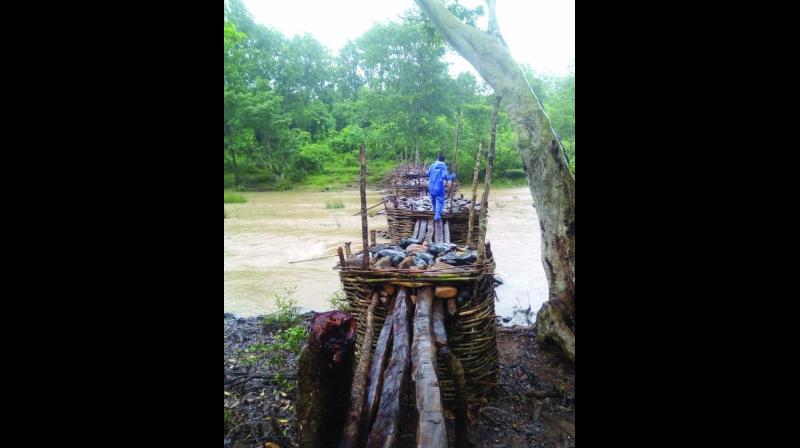 The bridge is made of bamboo, huge wooden logs and stones.

Chhattisgarh: A primitive tribe living in remote areas of Abujhmad, a 3905 sq km forest region extending from Bastar in Chhattisgarh to Gadchhiroli in Maharashtra, have built robust bridges over hilly streams and rivers and irrigation ‘canals’ using indigenous technology.

The “Desi” (indigenous) technology applied to build the bridges has proved very reliable since none of them have suffered any wear and tear despite being established decades ago, leaving experts in awe and amazement.

A 200 meter-long makeshift bridge set up over a wild stream in the village of Dhurbeda in Abujhmad under Orcha block in Narayanpur district bore testimony to the engineering skills of the local primitive tribe of Abujhmaria.

The bridge is made of bamboo, huge wooden logs and stones.

Heaps of stones tightly bound by slices of bamboos serve as pillars of the bridge whereas huge wooden logs are laid over the ‘pillars’ in such a way that the bridge becomes as compact as a concrete bridge.

“The bridge showcases engineering skill of the local tribals, who hardly have even primary education”, A.K. Dewta, a local civil engineer said.

The Abujhmarias have also built dykes made of stone and mud to divert streams originated from hills to their agriculture fields located as far as five km for irrigation purpose. The water channel can rival even modern irrigation system.

It required engineering skill to determine the point at the slope of the hill where the stop dam is needed for diverting the water of the stream to villages on the foothill, Mr Dewta said.

The traditional engineering skill of local tribals has come to light when the administration has started reaching the areas for the first time after independence.

Abujhmad, which has remained un-surveyed by the government of India till date, has total 237 villages.

Aerial survey of the area was done for the first time in 2005.

The land survey was launched in Abujhmad in April 2017. IIT-Roorkee has been assigned with the task of conducting a land survey.

“Land survey has completed in 25 villages in Abujhmad so far”, Mr Elma revealed.

Maoists have entered Abujhmad in the 1990s and consolidated their stronghold in the area by early 2000.