India   All India  06 Oct 2019  Assam: Not only for horns, rhinos are also killed for nails
India, All India

Assam: Not only for horns, rhinos are also killed for nails

Investigation has revealed that rhino nails are in demand in the grey market. 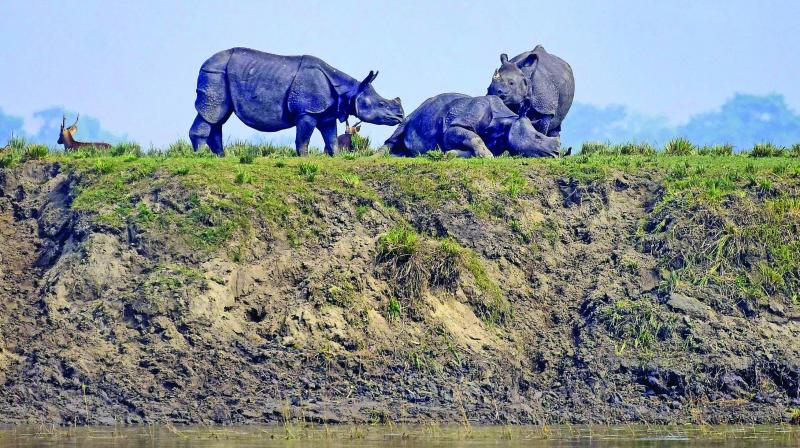 One-horned rhinoceroses seen at an elevated area in Kaziranga.

Guwahati: Wildlife experts are surprised by the fact that rhinos are poached not only for their horns but also for nails. This came to light recently when a team of forest and police officials got hold of a gang of poachers in the Baghmari area of central Assam’s Biswanath district and recovered 12 rhino nails and a horn.

It was for the first time that the police and forest officials have stumbled upon the fact that poachers are not only chopping the horns but also the nails of rhinos after killing them.

Investigation has revealed that rhino nails are in demand in the grey market. A forest officials involved in the investigation said that poachers in their confession revealed, “The nails are used as a substitute to make up for the scarcity of horns. Rhino horns are used in traditional Chinese medicines.”

The forest ranger of Biswanth wildlife division, Pranjal Baruah, said that five poachers who were running a racket of supplying wildlife parts in the district were arrested on September 17 from different areas of the district. He said, “We have recovered 12 nails and a horn from their possession. It is suspected to be of the rhino killed at Lokhora Chapori under the Biswanath wildlife division in April.”

“We have sent the seized items for forensic test. Of the five poachers arrested, one Budhindra Kaman of Bortamuli village in the district was directly involved in the rhino poaching case in the first week of April. He also collected the nails and horn. Each leg of a rhino has three nails. The other poachers were involved in arranging buyers to sell off the nails,” said the forest ranger who stressed the need for further investigation into it.

Pointing out that the team of forest officials and police had intelligence that poachers were looking for buyer and negotiating the price of nails, sources in the forest department said that poachers were exploring the route of Arunachal Pradesh to send horns and nails to Myanmar.

Indicating that some Naga rebel groups are involved in smuggling of animal parts from northeastern states, wildlife activists said that poachers have been using the sophisticated weapons like AK-47 rifles, suspected to have been supplied by armed rebel groups.

Sources said that they were trying to sell off the nails first because unlike the horn, the body parts are something new among the local smugglers. Three out of the five poachers arrested were involved in supplying wildlife parts.