Apple executive’s killing could be linked to frustration of abused cops: Ex-DGP 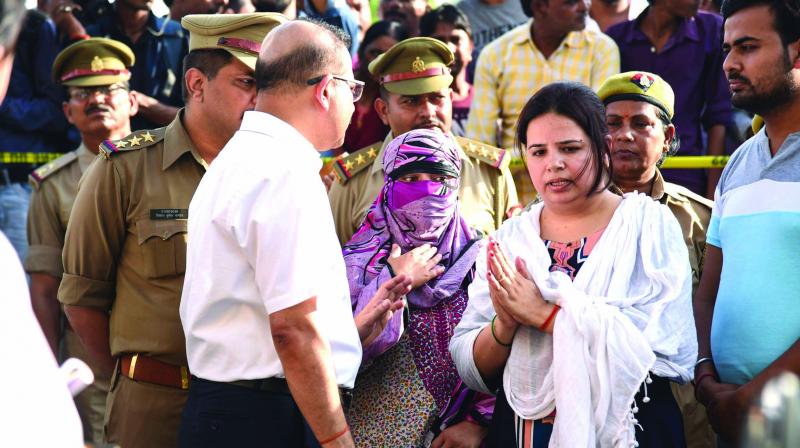 Officials with the wife of Apple executive Vivek Tiwari who was shot dead by cops.

Lucknow: The recent spurt in suicides by Uttar Pradesh government employees has sparked a debate with the victims’ kin blaming excessive official work load for driving them to end their lives but the Yogi Adityanath government linking the incidents to personal “family disputes”.

The killing of Apple executive Vivek Tiwari in Lucknow on September 29 by a policeman on picket duty, says a former state police chief, could  also a manifestation of the frustration among the constabulary that is constantly abused and ill-treated by senior police officers.

In the past one week alone, four government employees have committed suicide in different districts of Uttar Pradesh.

The widow of a police constable, who committed suicide two years ago, said, “My husband was under pressure and his senior used to abuse him. After he committed suicide, I tried to raise the issue with senior officials but they told me that if I create a hue and cry, I would not be given the post-death benefits. I had to keep quiet because of my three children.”

On September 30, a woman constable committed suicide by hanging herself from ceiling fan in Barabanki. In her suicide note, she blamed her seniors for mentally torturing her.

On the same day, a sub-divisional magistrate (SDM) posted in Lalitpur district ended his life by shooting himself with the gun of a home guard posted at his residence. He was also said to be upset with his posting.

An inspector posted in the personal security of Union minister of state Shiv Pratap Shukla shot himself on October 2 with his service revolver in Farukkhabad district and 100 kilometres away in Kanpur Dehat, a constable killed himself with his service rifle.

Earlier on September 5, superintendent of police, Kanpur, Surendra Das consumed poison and died five days later in hospital. The officer had spent over a week on Google trying to search methods of committing suicide.

In May this year, additional superintendent of police, posted at the Uttar Pradesh Anti-Terrorism Squad (ATS), Rajesh Sahni shot himself in his Lucknow office and in both the cases, investigating officers blamed the incidents on “family disputes”.

A retired director general of police said, “The malaise is much deeper than it seems. In the past few years, more than 100 cases of suicides have been reported and 90 per cent of them are related to work pressures and stress.”

He said that middle and lower ranking police personnel are working under tremendous stress. “Senior officials ill-treat and abuse them and the constables vent their frustration on the public — the recent killing of Apple executive Vivek Tiwari in Lucknow — is an example,” he said.

“Our constables are denied leave, no one cares about their personal problems and when they cannot bear the stress, they end their lives,” he said.

Another senior official said that it was surprising that a country that had the second largest police force in the world and the lowest policing ratio of 120 policemen for one lakh citizens did not have a human resource section.

“We should be having a HR section to address problems of cops and also a panel of psychiatrists to help them cope with the stress. The mental health of the police force is not  good,” the official said.

Suicides, incidentally, are not restricted to the state police force alone. IAS officer Sanjeev Dubey committed suicide in December 2016 by hanging himself “due to poor health”. But his colleagues, who were with him till a few hours before the incident, said that he  showed no signs of depression.

Another senior IAS officer Harminder Raj Singh shot himself in November 2009 after returning from a party. Doctors said that he was suffering from hypertension but his colleagues, in hushed tone, spoke about the work “pressure from the top”.