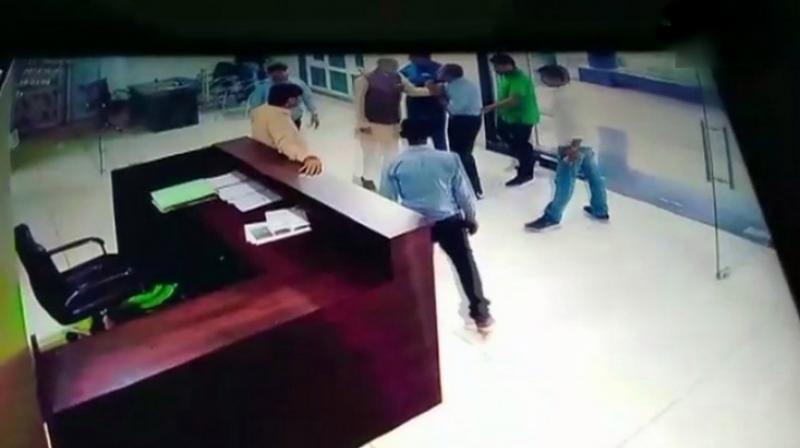 Bhopal: Two on duty toll booth staff on the Guna-Shivpuri road in Madhya Pradesh was allegedly beaten by Member of Parliament and former BJP president of Madhya Pradesh, NandKumar Singh Chauhan and his men on Friday.

Chauhan, a lawmaker from Khandwa Lok Sabha seat and his aides were stopped at the toll plaza, where the staff wanted to see their identity cards. This enraged the lawmaker and his supporters, claimed the staff at the Purankhedi toll plaza. Chauhan was returning after reviewing the preparations for BJP national president Amit Shah's visit to the area.

Amit Shah is scheduled to campaign in Madhya Pradesh for the next five days.

One of the workers suffered a head injury and has been hospitalised.

The toll plaza manager alleged Chauhan and his security guard also broke their walkie-talkie. "Instead of showing the ID proof, the lawmaker and his aides started abusing our staff and assaulted them. The toll staff was attacked by the BJP lawmaker at the toll booth as well as inside the office. Two of our staff are hurt in the attack and they have been hospitalised," said the manager, Mahendra Singh Tomar.

"The government has waived off toll for them, but thrashing is wrong," a toll plaza employee said.

The police meanwhile said, No official complaint has been filed. "We have not received any complaint about any such incident so far," said SP Rajesh, the officer at Hingankar police station.

Congress leader of opposition in Madhya Pradesh, Ajay Singh said, the former state BJP chief has "shown the mirror on the so called law and order situation in the state". A case should be registered against the lawmaker and his supporters, said Singh.

Defending the party leader, BJP spokesperson Rahul Kothari said, "Nandkumar Singh Chauhan is a cool headed politician and we can’t even imagine any violent behaviour from him. A proper probe is needed to find out whether the toll staff provoked the politician with any of their acts."

Madhya Pradesh is one of the five states, which goes polls later this year.