We are fully capable of confronting Pakistan, China at same time, says Dhanoa. 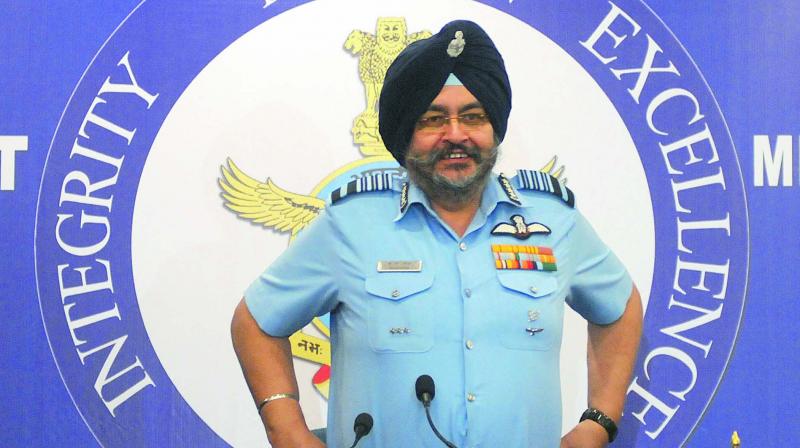 New Delhi: Air Chief Marshal B.S. Dhanoa said on Thursday that the IAF has the capability of locating and striking nuclear and other targets inside Pakistan.

“The IAF is prepared to fight at short notice in full synergy with other two sister services should the need arises. IAF has the capability of sustaining operational preparedness for a prolonged period,” he told reporters during a media briefing.

There has been a lot of global concern over the safety and security of nuclear weapons in Pakistan which is handled by the Nuclear Command Authority (NCA) of Pakistan.

Negating that the possibility of a two-front simultaneous war with China and Pakistan is strong, Marshal Dhanoa said the IAF is fully capable of dealing with the eventuality even as he ruled out the stealth capability of China’s highly-rated and much-touted Chengdu J20 air fighter that was operationalised by the Chinese air force just last week.

“The possibility of a two-front war in the current geo-strategic situation is low. (Yet) the response has to be based on the enemy’s capabilities because intentions can change overnight,” the Air Force Chief said.

On the implications of the Chengdu J20 stealth fighter on Indian skies, the IAF Chief told this newspaper on the sidelines of an IAF event before the IAF day on Sunday: “The J20 does not have full stealth capability. That way, the perfect stealth aircraft would be the American B-2 bomber, just look at its shape. So the J20 would not be invisible to our radars. Moreover, the new state-of-the-art technology fighters like the Rafale that we are acquiring would be able to detect an incoming J20.”

The stealth prowess of the brand new J20 is the toast of the Chinese nation at the moment amid speculations that it would substantially alter the dimensions in the possibility of an Indo-China conflict as it is believed to have the capability to evade Indian radars. At the moment, it is one of the three extant stealth fighters, besides the US’ F22 and F35. It is not clear as to how many numbers of the secretive J20 China is building although the estimates vary from six to 13.

Asked about the possible contradiction with both India and China buying the powerful S-400 missile system from Russia, the IAF chief said that while both systems were quite different with different configurations as one has been made for China and the other was being manufactured for India.

Saying that while the IAF needs a strength of 42 fighter squadrons, the full requirement will only be met by 2032. “But it does not mean that we cannot fight a two-front war with the existing strength. We have a Plan B,” he said.  Dhanoa added that the single engine fighter was a procurement priority as the moment and promised a right to request for information (RFI) soon. At present, the IAF operates just 33 squadrons.

On the security of the IAF bases in the aftermath of the brazen Pathankot airbase attack by Kashmiri militants on January 2 last year, the IAF chief said besides a slew of measures, a team of 6,000 air warriors have been specially trained to respond to terror attacks on the ground.