Over 20 lakh small depositors in Odisha have been duped to the tune of Rs 32,000 crore by over 160 chit fund firms. 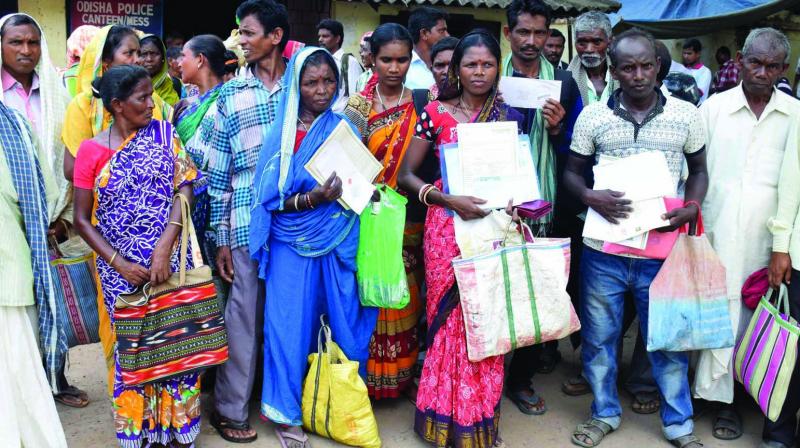 A file photograph of chit fund scam-affected people as they show receipts of money deposits after their meeting with Justice M.M. Das Commission in Cuttack.

BHUBANESWAR: The Central Bureau of Investigation (CBI), which showed uncommon promptness in rounding up several top leaders of the Trinamul Congress (TMC) in West Bengal for their alleged nexus with chit fund scamsters, seems to be going slow in booking some of the top political bosses, bureaucrats and police officers who have been found instrumental in looting several thousand crore rupees from small investors.

For over three years now, the Central investigating agency has not touched a single accused person, allegedly allowing them time to tamper with evidences.

The Opposition Congress alleges that since most the accused belonged to the ruling BJD, the “foe-turned ally” of the BJP, the probe agency is not taking any action against the accused.

Over 20 lakh small depositors in Odisha have been duped to the tune of Rs 32,000 crore by over 160 chit fund firms.

In the past, a sitting Lok Sabha member, two sitting and MLAs and one former MLA – all belonging to the BJD – were arrested by the premier agency. The arrested BJD leaders included Ramachandra Hansda (then Mayurbhanj MP), Prabhat Tripathy (ex-MLA, Banki), Pravat Ranjan Biswal (ex-MLA, Choudwar) and Subarna Naik (ex-MLA, Keonjhar). One ex-BJP lawmaker, Hitesh Bargarti, was also arrested.

The last big arrest the CBI had made was in September 2017 when BJD MLA from Choudwar, Pravat Ranjan Biswal was picked up for questioning for alleged links with ponzi firm Seashore Group.

“The CBI has delayed its investigation and lakhs of affected depositors are waiting for justice. People of Odisha are aware that several MLAs, MPs and other leaders were arrested in chit fund scams in the past. There are several other chit fund companies which are yet to be brought under the purview of investigation and if that happens, nearly 30 to 40 BJD MPs, MLAs and former MLAs will be in the dock,” said Congress spokesperson Arya Kumar Gyanendra.

Mr Gyanendra smells a big design behind the BJP’s silence over the Odisha chit fund scam.

“I have reasons to believe that the BJP-led NDA government at the Centre is protecting the BJD leaders in lieu of the regional party’s support to it in Parliament. The state BJP leaders who were earlier shouting at the top of their voice demanding action against the BJD leaders involved in the chit fund scam, are observing a studied silence,” Mr Gyanendra.

“The CBI is a neutral investigating body.  It functions with its own mandate and does not take orders from any authorities. We would be happy if the CBI reaches out to all the people who have looted the gullible depositors and ensures punishment to them in the court of law,” said Mr Mohapatra.

The CBI, apart from top politicians, had quizzed some bureaucrats, Indian Police Service (IPS) officers and other influential persons, including journalists, in the chit fund scam. However, no important members of these groups were arrested. Though the probe agency had got “substantial and clinching” evidences about some of the then ministers and MLAs getting favours such as cash and high-value four-wheelers as gifts, it did little to arrest them, raising doubts about its transparency.

While BJD MP Ramachandra Hansda and MLAS Prabhat Tripathy and Tripathy and Pravat Ranjan Biswal were arrested, the CBI had served notice to a few other BJD leaders to appear before it for their alleged links with Artha Tatwa Group.

Subhankar Nayak, a chit fund agent who was arrested on November 18, 2014, had mentioned the names of several officers in his diaries as beneficiaries of ponzi firm Seashore Group.

In one of the four diaries, Nayak wrote that four superintendents of police (SPs), one deputy inspector general of police (DIG), two collectors and several politicians were paid by the Seashore Group to protect the illegal money circulation business. The CBI has submitted excerpts from the diary in the court of special CJM (CBI) on November 18, 2016.

Despite having such clinching clues, the CBI has not gone beyond the customary questioning of the officers.

According to Justice MM Das Commission of Inquiry, at least 174 chit fund firms have collected nearly Rs 10,000 crore from 20 lakh investors, while the civil society organisations calculate the loot amount at around Rs 32,000 crore.