1 year after Sec 377: stirrings of change but long way to inclusivity

In the year since the Supreme Court's verdict, transgender persons have been taking part in mainstream politics. 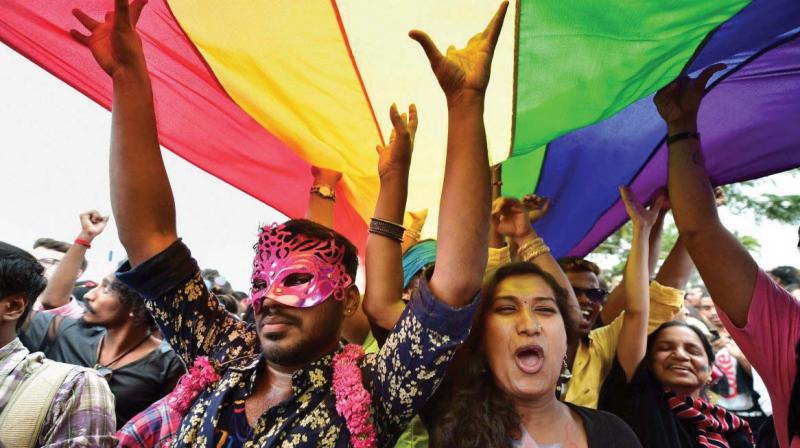 According to the 40-year-old, the most evident change since the landmark judgement has been an increase in the visibility of LGBTQ people, and the community has the mainstream media as well as social media to thank for it.(Photo: PTI)

New Delhi: This day, last year, the Supreme Court decriminalised homosexuality. The 12 months that followed the apex court's historic verdict ushered in a wave of positive changes in favour of the LGBTQ community, say rights activists and other experts.

Though the road to true inclusivity is long and riddled with potholes, some progress has been made -- the community has found representation in mainstream politics and entertainment, corporates have become more inclusive, the government is creating an anti-discrimination framework for transgenders, and more people are coming out in support. "From being page 15, we have become page 1 and page 2," rights activist Harish Iyer told PTI.

According to the 40-year-old, the most evident change since the landmark judgement has been an increase in the visibility of LGBTQ people, and the community has the mainstream media as well as social media to thank for it.
"Visibility has been one of the main reasons why acceptance has grown as well. So the new perception is that if you are a homophobe, you are a bad person. "Earlier it was ok to say 'they are gay people, why are you mingling with them?' That is changing. I can't talk about the whole of India, but in metros it's definitely happening," Iyer said.

On September 6, 2018, a five-judge Constitution bench of the Supreme Court unanimously decriminalised part of the 158-year-old colonial law under Section 377 of the IPC which criminalised consensual unnatural sex. However, the fight against the still prevalent regressive mindset remains the core of the battle, said transgender activist Achinta of Kolkata-based youth organisation Prantakatha. But she is optimistic.

"The mindset that has developed over a thousand years cannot be changed in just one. But I'm hopeful that we'll get there," she said. In the year since the Supreme Court's verdict, transgender persons have been taking part in mainstream politics.

The Aam Aadmi Party fielded Bhawani Nath Valmiki from the Prayagraj Lok Sabha seat in Uttar Pradesh, and the Bahujan Samaj Party backed Kajal Nayak for the Korei Assembly seat in Odisha. Both lost their seats, but the symbolism was more than welcome, say community leaders.

In January this year, the Congress appointed Apsara Reddy, a trans woman, as national general secretary of the All India Mahila Congress. In July 2019, the Lok Sabha cleared The Transgender Persons (Protection of Rights) Bill 2019 that sought to create policies for the people of the community, and help them to obtain documents of identification.

To open up employment avenues, the country's first LGBTQ job fair was organised in Bangalore in July by Pride Circle, a volunteer-driven platform that engages with LGBTQ individuals. Another all-inclusive job fair Vividh by 6 Degrees, a Mumbai-based LGBTQ growth network, followed suit.

The movement received a massive lift when sprinter and national champion Dutee Chand came out as a lesbian, becoming the first Indian athlete to do so. While she faced backlash from her family and friends in her small village in Odisha, people on social media came out in droves to extend their support.

The LGBTQ community's fight for equality started some 25 years ago, when a writ petition was filed against Section 377 in Delhi High Court in 1994.

Aditya Shankar, a consultant with a private management firm in Bengaluru, said the community's representation in the mainstream went up, particularly in the last one year. The 25-year-old gay consultant said Bollywood films like Sonam Kapoor starrer "Ek Ladki Ko Dekha To Aisa Laga" that talked about the stigma around same sex relationships have a role to play.

"Although there is still a long way to go, we now have mainstream movies like ‘Ek Ladki Ko Dekha To Aisa Laga'. That sort of acceptance has come in the country in the last year... that's very optimistic,” the IIT graduate said.

Pallav Patankar from 6 Degrees agreed. He said cinematic representations of the community, once portrayed as caricatures, are now handled with a lot of sensitivity and seriousness. “Now you have a queer film festival. These LGBTQ characters are being woven into everyday lives, everyday cinema. If you see 'Sacred Games', they are no longer caricatures, they are serious characters," he said.

The battle, however, is only half won. Iyer said many individuals within the community are yet to feel confident about their sexuality. Many, he added, had come out to the world, but not to their own families. "They are still vulnerable. So when love comes out of the closet, hate comes out of the closet too. So for us to believe everything is hunky dory now is to live in a fool's paradise," he said.

Shankar noted that while last year's verdict was certainly a step forward, it did not in fact do anything for our civil rights. "It only removed the criminal status," he said. Members of the LGBTQ community cannot get their marriages registered.

Subsequently, they are denied the basic rights to nominate their partners in insurances, and other legal documents. they cannot open a joint bank account, or sign a house lease with their partner. Same sex couples also cannot adopt a child under the Surrogacy bill.