Security has been stepped up and school closed in Bihar, Madhya Pradesh and some other states on Thursday. 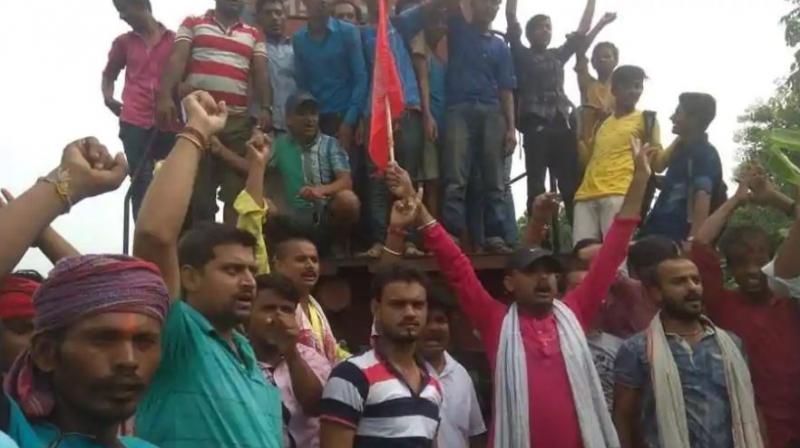 Protesters stopped trains in Bihar’s Darbhanga and Munger and high alert was issued in 35 districts of Madhya Pradesh. (Photo: ANI)

Bhopal: Security has been stepped up and school closed in some states in view of ‘Bharat Bandh’ called by some groups on Thursday against the amendment to the SC/ST Act.

Protesters stopped trains in Bihar’s Darbhanga and Munger and high alert was issued in 35 districts of Madhya Pradesh. Thirty-four companies of security forces and 5000 security personnel were deployed and Section 144 was imposed in several districts of the state as a precautionary measure.

Protests were also reported from several places in Uttar Pradesh.

“We have decided to shut petrol pumps from 10 am to 2 pm tomorrow due to security reasons as some organizations have given a call for bandh,” Madhya Pradesh Petrol Pump Owners Association president Ajay Singh told PTI on Wednesday.

Police have tightened security across the state in view of ongoing protests against the amendment to the Scheduled Castes and Scheduled Tribes (Prevention of Atrocities) Act.

“The administration in most of the districts have clamped prohibitive orders under CrPC section 144 in view of the bandh on September 6,” he said.

Thirty-four companies of the special armed force of police have been deployed in various districts, he said.

Jabalpur district collector Chhavi Bharadwaj has written to the state home department, seeking suspension of Internet services in the district till 6 pm on Thursday.

Bhopal: High alert issued in 35 districts across the state in view of #BharatBandh against amendments in SC/ST Act. 34 companies of security forces and 5000 security personnel deployed. Section 144 imposed in several districts. #MadhyaPradesh pic.twitter.com/OLcRV9pjxy

District Education Officer in Bhind has ordered that schools in the district will remain closed.

Meanwhile, protests against the amendment to the SC/ST Act continued in the state Wednesday.

Slogans were shouted by protesters outside the venue of BJP’s OBC cell’s meeting in Gwalior.

After the Supreme Court diluted the provision of mandatory arrests under the SC/ST Act, sparking protests by Dalit organisations, the Union government brought an amendment in the monsoon session of Parliament to override the apex court’s order.

Gwalior-Chambal region, considered a sensitive area, had witnessed large-scale violence on April 2 this year during the Bharat Bandh called by Dalit groups.

Now, upper caste organisations are protesting against the amendment.

Brahma Samagam Sawarna Jankalyan Sangathan’s national president Dharmendra Sharma said about 150 organisations of upper castes and OBCs would participate in the Bharat Bandh against the amendment.