The state clarified that it was committed to the protection of the fundamental rights of every citizen. 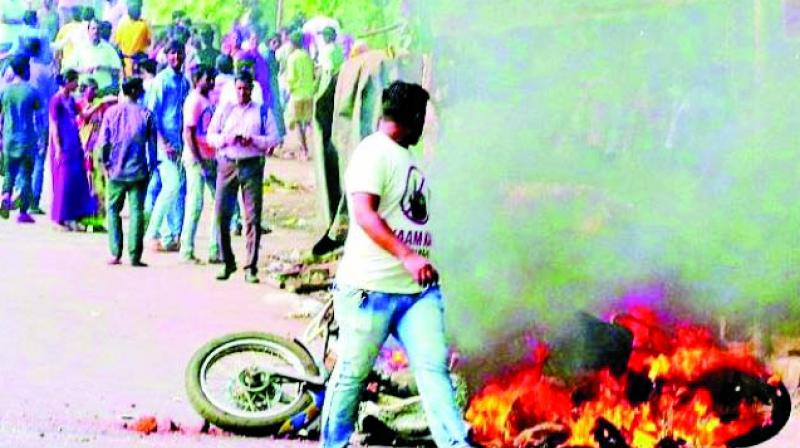 New Delhi: The Maharashtra government on Wednesday asserted in the Supreme Court that five human rights activists were arrested not for their “dissent” but for their active role in the conspiracy to create violence in the Bhima Koregaon incident. The state said this in its response to the petition filed by Dr Romila Thapar and others challenging the arrest of Sudha Bharadwaj, Gaut-am Navlakha, Arun Ferreira, Vernon Gonsa-lves and P. Varahara Rao.

On August 29, while entertaining the petition by Dr Romila Thapar, the court had observed dissent is the safety valve of democracy and it could not be curbed by such arrests. The court ordered their house arrest till September 6 and sought Maharas-htra’s reply to the writ petition challenging the arrest of five activists for their alleged Maoist links from Delhi, Faridabad, Mumbai, Thane and Hyderabad.

The state said the court was dealing with persons against whom cogent evidence had so far come on record that showed they were active members of a banned terrorist organisation, the Communist Party of India (Maoist), and were involved in not only planning and preparing for violence but were in the process of creating large-scale violence and destruction of property, resulting in chaos in society as per the agenda prepared by the CPI(Maoist). This was banned as a terrorist organisation in 2009.

Rejecting the allegation, the state said materials collected in the probe would suffice to remove any impression that “political dissenters” who are “intellectuals” were being hounded and the voice of dissent was being suppressed.

It said it would become clear they were committing and planning/preparing for a series of criminal offences in connivance with other persons. It is further said the writ petition was based on the individual perception of the petitioners on the “eminence” of the arrested persons, media reports and statements by activists and others condemning the arrests, not on the basis of any direct knowledge regarding incriminating facts.

The materials recovered from the laptops, pen drives, memory cards, etc of those initially accused in the FIR indicated their association with the CPI (Maoist) and “reflected an ongoing sinister design of having committed and in the process of committing criminal offences having the potential of destabilsing society”.

At the outset, the state submitted that the writ petition was not maintainable either under Article 32 of the Constitution or otherwise. It said when an investigation under the Code of Criminal Procedure begins either upon an FIR or a complaint and was under way, it was only the accused who can maintain proceedings before the competent courts, including constitutional courts.

The present petition is purported to have been filed by five unconnected individuals with the prayer with respect to the arrest and investigation. The petitioners, who are strangers to the offence under investigation, are also praying for bail on behalf of the persons involved.

The affidavit noted that the sum and substance of the petition was to the effect that the five persons arrested are persons of eminence (as per the perception of the petitioners), who according to the petitioners cannot commit any offence, and since the arrests are condemned by some “activists” and “intellectuals”, this court should invoke its constitutional jurisdiction and release the said five accused persons.

The state said it was unfortunate that the petitioners had not even bothered to pray that the court should at least examine the allegations against the five accused persons. The entire petition was based upon the perception of the petitioners that the arrested persons are “all outstanding, well-known and well-respected human rights crusaders” and, therefore, their arrest requires to be enquired into and they should be released on bail.

The state clarified that it was committed to the protection of the fundamental rights of every citizen. A mere dissenting view, difference in ideology or vehement objections to political thinking cannot be prohibited but should always be welcomed in any democratic country.

It was, however, submitted that this case was one where the five accused persons were not arrested based upon any dissenting views expressed by them or difference in political or other ideologies. The contents of materials seized clearly reflect the preparation, planning and coordination not only among the aforesaid persons but with others (subsequently arrested) to carry out violence, planned ambush/rebellion against the “enemy” (which is our country and its security forces).

Pleading for vacating the interim “house arrest” order, the state said the arrest of accused persons was also done as they were required for custodial interrogation. This was intended to prevent them from not only destroying further evidence, but also giving leads to other accused to whom the investigating agencies could have reached.