2+2 talks: Jim Mattis says ready to discuss 'anything' with India

Focus of dialogue will be to resolve differences over India's defence engagement with Russia, crude oil import from Iran. 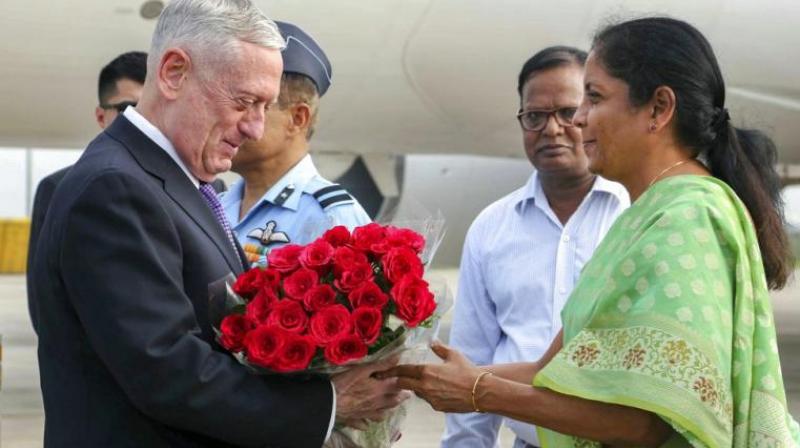 Defence Minister Nirmala Sitharaman presents bouquet to US Secretary of Defence James Mattis on his arrival in Delhi, to attend India's first ever '2+2 Dialogue' between the two nations. (Photo: PTI)

New Delhi/ Washington: US Defence Secretary Jim Mattis on Wednesday said that he is ready to discuss "anything" during the inaugural two-plus-two dialogue and anticipates that the issue of the purchase of S-400 Russian missile system would be brought up by the Indian delegation.

"Certainly, the S-400s will probably be brought up. I anticipate it'll be brought up by India, by the way," Mattis told reporters travelling with him to India.

The two-plus-two dialogue is scheduled for September 6 and 7.

Asserting that India and the US will have a very transparent dialogue, Matttis said it is a dialogue between two co-equal and sovereign nations.

"We will discuss anything that they bring up, and certainly, there'll be issues we bring up," he said.

Responding to questions on India's decision to buy S-400 Russian missile defense system, Mattis told reporters that freedom meant that at times, nations did not agree with each other.

"That doesn't mean we can't be partners. That doesn't mean we don't respect the sovereignty of those nations. So I'm sure it will come up there, but it's right that I not speak here before I've even heard their point. So first, I want to listen to my counterpart," he said.

Jim Mattis said India and the US had been discussing how they can communicate back and forth more openly.

"Because of the sensitivity of some of the technology, we have to know that when we share this with another like-minded nation, that we can keep it secure, just like we do when the Navy talks to the US Army. It no different," he said.

"You maintain security over this kind of technology. We'll be talking to them about this. There's been a lot of work done by our staffs. They have their own processes for approval of something like this. We have ours. No two nations have exactly the same authority levels or organisations that have to check off - check the box, and also, we'll see where each other's at on that," he said.

The response indicated that the two countries are still a few steps behind in signing the key foundational agreements including the one on communications, he said.

"I think that we're pretty much there already, on the American side. We'll see where they're at. Our staff's been meeting, and once we get that put in place, that does give us the opportunity to share some of the sensitive technology," Mattis said.