Doctors said that he is suffering from heart, renal and other serious diseases and needed to be kept away from COVID-19 patients 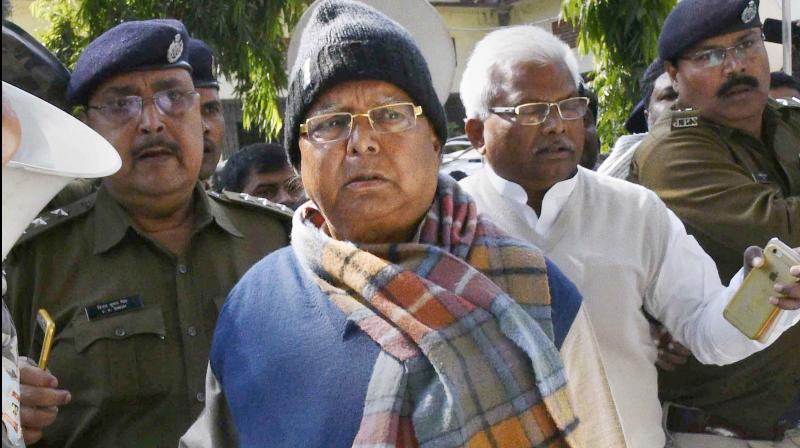 Jailed RJD chief Lalu Yadav has been shifted to the official residence of the hospital director located on the premises. (PTI Photo)

Patna: Jailed RJD chief Lalu Yadav has been shifted from the paying ward of the Rajendra Institute Medical Sciences (RIMS) in Ranchi to the official residence of the hospital director located on the premises.

Sources aware of the development told this newspaper that the decision to move Lalu was taken after three of his caretakers tested positive for COVID-19 on July 25. This prompted his doctors to suggest the hospital authorities to shift 72-year-old RJD supremo to an isolated area.

Lalu Yadav is being treated for multiple serious ailments at RIMS Ranchi. Doctors said that he is suffering from heart, renal and other serious diseases and needed to be kept away from COVID-19 patients.

The BJP, however, feels that Lalu Yadav is getting “special treatment” from JMM-Congress-RJD led Mahagathbandhan government in Jharkhand. Talking to this newspaper on the issue, BJP spokesperson Nikhil Anand said, “If Lalu Yadav is being given any kind of special favour beyond the existing law overlooking the jail manual then the matter is very serious. We would like to warn the Jharkhand government against giving any privileges to any person serving jail sentence”.

Lalu Yadav was earlier criticized for using mobile phones and holding political meetings inside the RIMS premises. After he was shifted to the RIMS director’s official bungalow, BJP leaders in Ranchi alleged that “the premises would be used as RJD headquarters where meetings will be held to discuss the upcoming assembly elections in Bihar”.

After being convicted in the second fodder scam case involving the illegal withdrawal of Rs. 89.27 Lakh from Deoghar treasury, Lalu Yadav was sent to Birsa Munda jail in Ranchi. He was later shifted to the RIMS in March 2018 after his health condition deteriorated.

Fraudulent withdrawal from government treasuries and use of fake bills and vouchers had surfaced in 1996. Officials conducting raids in 1996 had found that money was paid to non-existent companies for supplying fodder to the animal husbandry department.

Five fodder scam cases were shifted to Jharkhand after the separation of the state from Bihar in 2001.