The Centre had revoked which gave special status to and proposed that the state be bifurcated into two Union Territories, and Ladakh. 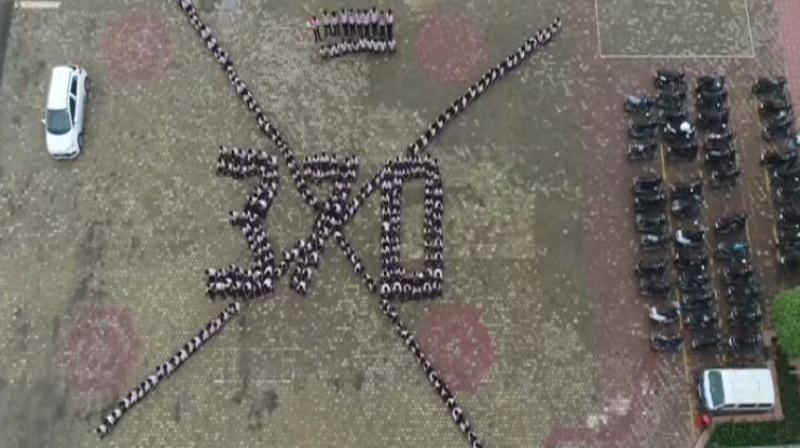 In a unique way to celebrate the abrogation of Article 370, students of Swaminarayan Gurukul School in Surat on Monday created a human chain. (Photo: ANI)

Surat: In a unique way to celebrate the abrogation of Article 370, students of Swaminarayan Gurukul School in Surat on Monday created a human chain.

The students sat on the ground in an order to create "370" with a cross on it. They were also seen waiving the Indian flag on the occasion.

"Article 370 has been removed. To celebrate this moment, teachers of Swaminarayan Gurukul School thought of creating a human chain like this," Prabhujeevan Swami, trustee of the school told ANI.

The Central government had revoked which gave special status to and proposed that the state be bifurcated into two Union Territories.

The Jammu & Kashmir (Reorganisation) Bill, 2019, which strips status of a state and converts it into a Union Territory with legislature and carving out Ladakh region as a UT without legislature, was passed in a division pressed by the opposition with 125 votes in favour and 61 against, and an NCP member abstained.