India   All India  06 Aug 2019  How is Kashmir internal issue, UN monitoring it: Congress shoots self goal
India, All India

How is Kashmir internal issue, UN monitoring it: Congress shoots self goal

Chowdhury also stated that the central government is not 'thinking about PoK (Pakistan occupied Kashmir)'. 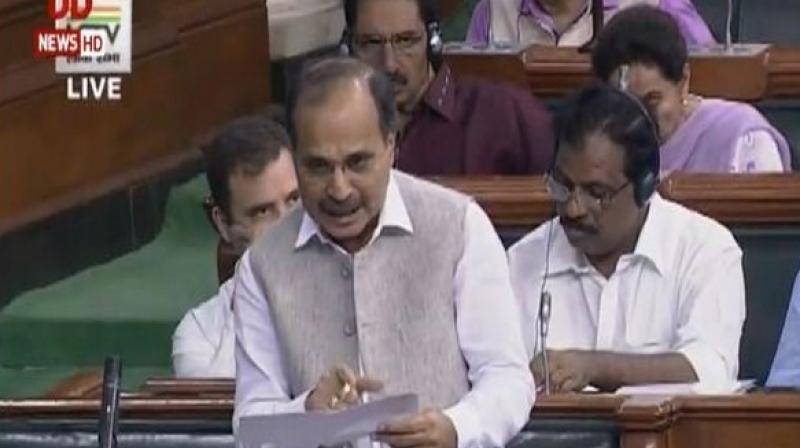 'You violated all rules and converted a state into a Union Territory overnight,' he stated. (Photo: ANI)

New Delhi: Questioning India's long-established position, Congress leader Adhir Ranjan Chowdhury on Tuesday threw a shocker in the Lok Sabha, asking how was Kashmir issue is an "internal matter" if "United Nations is monitoring it since 1948."

The Congress leader's remark not only opposes New Delhi's decade-old stand on Kashmir but is also in stark contrast to the country's views on UN Military Observers Group on India and Pakistan (UNMOGIP) - a group of UN military observers deputed in 1949 to supervise  the ceasefire between India and Pakistan in Jammu and Kashmir.

India has opposed UNMOGIP's operations especially after the Simla Agreement of 1972 that says the Kashmir issue is to be resolved bilaterally between India and Pakistan. Islamabad, however, has frequently called for third-party involvement in the matter.

In 2014, India had asked UNMOGIP to vacate the bungalows provided to it in the national capital by the government.

Sharpening his party's attack against the Centre over the scrapping of Article 370, the lawmaker said," S Jaishankar told Mike Pompeo a few days before that Kashmir is a bilateral matter, so don't interfere in it. Can Jammu and Kashmir still be an internal matter? We want to know. Entire Congress party wants to be enlightened by you."

Chowdhury also stated that the central government is not "thinking about PoK (Pakistan occupied Kashmir)".

"You violated all rules and converted a state into a Union Territory overnight," he stated.

Responding sharply to the Congress leader's remark, Home Minister Amit Shah said, "Whenever I talk about Jammu and Kashmir, Pakistan occupied Kashmir (PoK) and Aksai Chin comes under it and we can lay down our lives for it."

A resolution removing the special status of Jammu and Kashmir under Article 370 was approved by the Rajya Sabha on Monday.

The Jammu and Kashmir (Reorganisation) Bill, 2019, which strips Jammu and Kashmir's status of a state and converts it into a Union Territory with legislature and carving out Ladakh region as a UT without legislature, was passed in a division pressed by the opposition with 125 votes in favour and 61 against.