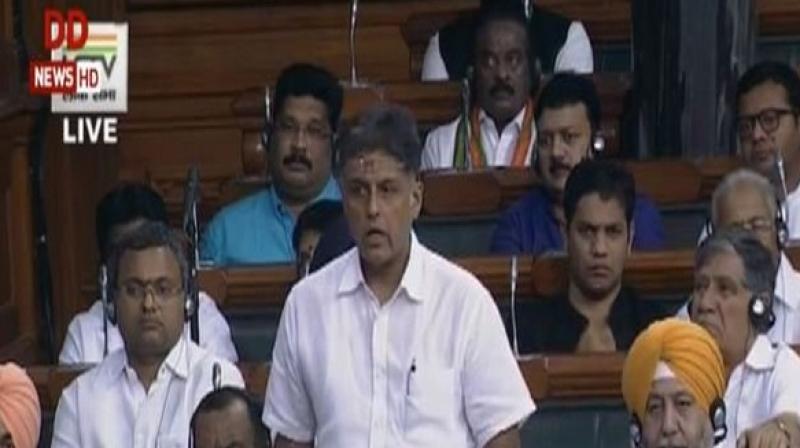 Tewari said, 'Ek angrezi ki kitaab hai, har cheez kali aur safed nahi hoti, (There is an English novel, everything is not in black and white.) There are fifty shades of grey in between.' (Photo: ANI)

New Delhi: Congress leader Manish Tiwari on Tuesday found himself being trolled in the social media after he mentioned popular 2011 romance novel 'Fifty Shades of Grey' while speaking in Lok Sabha during the debate on Jammu and Kashmir Reorganisation Bill.

Soon after Tewari made a speech, Home Minister Amit Shah asked him to clarify whether Congress party is against or in support of the abrogation of Article 370 in Jammu and Kashmir.

In reply, Tewari said, "Ek angrezi ki kitaab hai, har cheez kali aur safed nahi hoti, (There is an English novel, everything is not in black and white.) There are fifty shades of grey in between."

Tewari's remark did not go well with several social media users, who poked fun at his referene to the novel.

Another tweeted, "As soon as Manish Tiwari mention 50 Shades of Grey, the whole country is now on Google."

Another user said, "Congress's Manish Tiwari suggests not everything is black or white, there are 50 shades of grey in between. And the best part is HM Amit Shah's laughter during the statement. Best debate ever."

Another user questioned "what was Manish Tewari thinking in mind while saying this?"