India   All India  06 Aug 2017  GJM to join 'Tiranga Yatra' to protest against colonial rule of Mamata govt
India, All India

The rally will coincide with Prime Minister Narendra Modi's call for the same to mark the 75th anniversary of the Quit India Movement. 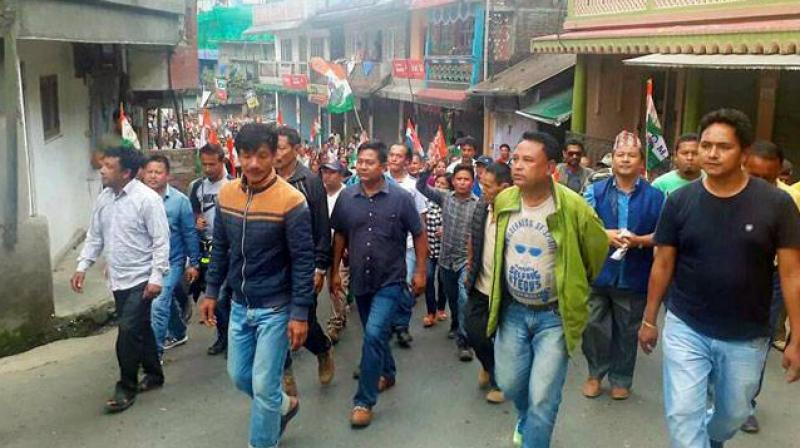 GJM chief Bimal Gurung said that the rally in Darjeeling will not only celebrate 'our glorious freedom struggle' but protest 'Bengal's colonial rule'. (Photo: PTI/File)

Darjeeling (West Bengal: The Gorkha Janmukti Morcha (GJM) will join the "Tiranga Yatra" on August 8 to continue their demand of Gorkhaland and also to protest against the "colonial rule" of the West Bengal government.

The rally will coincide with Prime Minister Narendra Modi's call for the same to mark the 75th anniversary of the Quit India Movement.

"On the call from Honourable PM of India to celebrate the 75th Anniversary of Quit India Movement, the people of India will be participating in "Tiranga Yatra" across the nation from August 9 to 15. The rally seeks to pay homage to our forefathers, and the nation will reverberate with the slogans of "Vande Mataram" and "Bharat Mataki Jai", GJM chief Bimal Gurung said in a statement.

He added that the rally in Darjeeling will not only celebrate "our glorious freedom struggle" but protest "Bengal's colonial rule" and therefore, will be marked with slogans such as 'Bengal - Darjeeling Chodo'.

"Celebrating the momentous occasion in India's freedom struggle, it has been decided that Darjeeling hills, Terai and Dooars will also be participating in the "Tiranga Yatra". Just as how the British had enslaved us Indians and exploited and tortured us, the West Bengal government has also kept the people in Darjeeling hills, Terai and Dooars in a slave like condition. Despite 70 years since independence, the people living in our region have not been accorded any freedom, we are still living under a colonial rule," the statement added.

Therefore, he said, when they participate in the " Tiranga Yatra" they will not only be celebrating the freedom struggle, but also be protesting against the Bengal's colonial rule.

"Therefore, along with the slogans of "Vande Mataram" and "Bharat Mataki Jai" we will also be chanting "Bengal - Darjeeling Chodo," "We want Gorkhaland" and "Jai Gorkha, Jai Gorkhaland".Together we will march for our nation and our state - Gorkhaland," he said.

Meanwhile, GJM supporters on Saturday took out rallies in various parts of the Hills, demanding restoration of Internet services, which have been suspended since June 18, and an immediate withdrawal of police personnel from the region.