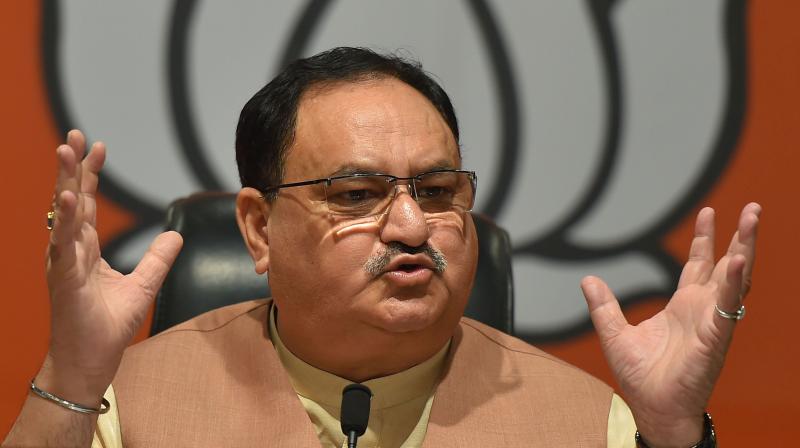 New Delhi: BJP President Jagat Prakash Nadda on Monday said that Congress leader Rahul Gandhi has not attended a single meeting of the Standing Committee on Defence, however, he continues to demoralise the nation and question the valour of the armed forces.

"Rahul Gandhi does not attend a single meeting of Standing Committee on Defence. But sadly, he continues to demoralise the nation, question the valour of our armed forces and do everything that a responsible opposition leader should not do," Nadda tweeted.

"Rahul Gandhi belongs to that glorious dynastic tradition where as far as defence is concerned, committees don't matter, only commissions do. Congress has many deserving members who understand parliamentary matters but one dynasty will never let such leaders grow. Really sad," Nadda added.

Rahul Gandhi had on Friday said that the voices of "patriotic Ladakhis" must be heard and ignoring them would cost India "dearly".

"Patriotic Ladakhis are raising their voice against Chinese intrusion. They are screaming a warning. Ignoring their warning will cost India dearly. For India's sake, please listen to them," wrote Gandhi on Twitter.

The former Congress president also shared a video allegedly showcasing testimonies of the people of Ladakh regarding previous India-China clashes besides the recent Galwan Valley face-off.

The Prime Minister on Friday made a surprise visit to Ladakh and was briefed by senior officers at Nimmoo amid ongoing tension with China. The PM was accompanied by Chief of Defence Staff (CDS) General Bipin Rawat and Army Chief General Manoj Mukund Naravane.