The women have alleged that the accused were supporters of Akali Dal, and came to vandalise their shops in Kotakpura. 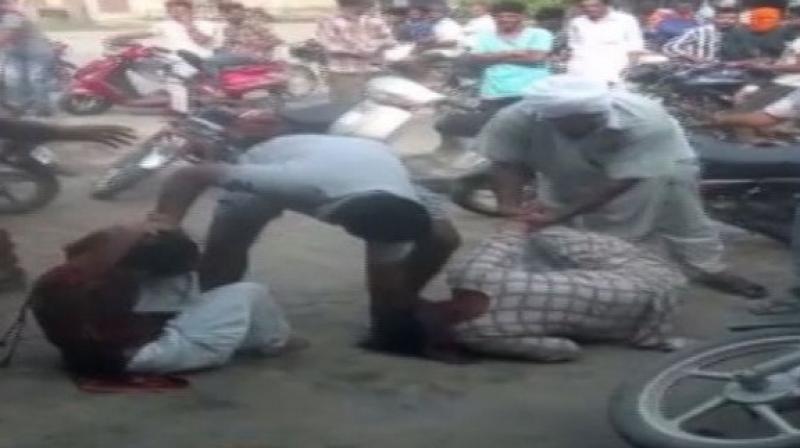 A video of the incident, that has now gone viral on social media, shows a group of men brutally thrashing two women and hurling abuses at them. (Photo: ANI)

Kotakpura: Two women were brutally beaten up by a group of men over a dispute in Faridkot district's Kotakpura, police said on Saturday.

A video of the incident, that has now gone viral on social media, shows a group of men brutally thrashing two women and hurling abuses at them.

The women have alleged that the accused were supporters of Akali Dal, and came to vandalise their shops in Kotakpura.

Rani, a victim, said that her husband is the son of her father-in-law's second wife. Since her father-in-law passed away, a dispute over property is on between his first wife's children and her family. The case is underway in the court.

"When I reached there, I saw that Sukhdev Singh (accused) was throwing items out from our shop. When I tried to stop him, he started assaulting me and dragged me and my family member from the shop. He and his supporters pulled our hair, hurled abuses on us and hit us badly. When the crowd gathered hearing the noise made by us, they fled from the spot and took two cameras from our shop," Rani said.

Taking cognisance of the incident, members of the Bhim Army are demanding to arrest the accused in this case at the earliest and register cases against them under different sections of the SC Act.

According to Faridkot Superintendent of Police Gurmeet Kaur, police have filed a case against the accused under various sections of the Indian Penal Code and SC Act.

"Our investigation is underway and culprits will be arrested soon," Kaur said.