The FIR said that a loss of Rs 48 crore was caused to ICICI bank and consequent gain by RRPR. 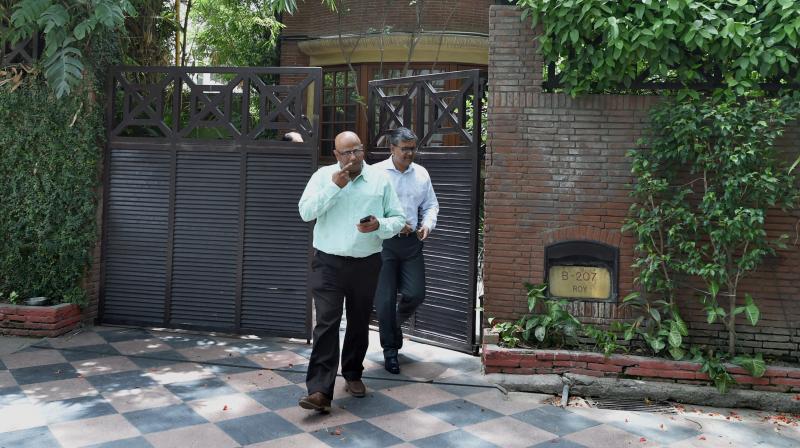 The residence of founder and executive chairman of NDTV, Prannoy Roy, where the Central Bureau of Investigation (CBI) conducted raids in connection with a case in which it was alleged that Roy and his wife, Radhika had caused loss to a bank, in New Delhi. (Photo: AP)

New Delhi: The CBI on Monday conducted searches at the premises of NDTV founder Prannoy Roy and his wife Radhika Roy at the national capital and in Dehradun for allegedly concealing a share transaction from the SEBI, regulator for the securities market in India, and causing a loss of Rs 48 crore to a private bank.

Immediately after the searches, the private television news channel issued a statement and called CBI raids on the premises of its owners a “political attack”, adding it was the government’s attempt to silence the media.

The CBI spokesperson strongly denied the witch-hunt allegations levelled by NDTV and said the agency was following procedures laid in the law.

Information and broadcasting minister M.Venkaiah Naidu said there was no political interference in the CBI raids on Mr Roy’s properties and the law was taking its course. “If somebody does something wrong simply because they belong to the media, you cannot expect the government to keep quiet,” Mr Naidu told reporters.

Sources in the CBI said the agency had registered a case against RRPR Holding pvt limited, Prannoy Roy, his wife Radhika and unidentified officials of ICICI Bank of criminal conspiracy, cheating and corruption.

“The promoters of NDTV pledged their entire shareholding in NDTV as a collateral to ICICI for this loan. This pledging of shares was not reported to the SEBI, stock exchanges and the Ministry of Information and Broadcasting”, said the FIR registered by the CBI. Such concealment was allegedly done as a creation of more than 61 per cent voting capital, which was in violation of section 19 (2) of the Banking Regulation Act. It should not be more than 30 per cent, said the FIR. An interest waiver of 10 per cent was given by ICICI.

The FIR said that a loss of Rs 48 crore was caused to ICICI bank and consequent gain by RRPR. The searches took place at two locations in Delhi and one each in Dehradun and Mussoorie.

Meanwhile, the NDTV in a statement issued after the searches, said, “This morning, the CBI stepped up the concerted harassment of NDTV and its promoters based on the same old endless false accusations.” It said NDTV and its promoters would fight tirelessly against this witch-hunt by multiple agencies. “We will not succumb to these attempts to blatantly undermine democracy and free speech in India. We have one message to those who are trying to destroy the institutions of India and everything it stands for: We will fight for our country and overcome these forces,” it said. The Congress also condemned the CBI raids on NDTV founder and termed it as an attack on the freedom of the press. Senior Congress spokesperson Ajay Maken said the Congress strongly condemned the action and said the Central government that it should not try to hound the media.

The Editors Guild of India expressed its concern over the raids conducted by the CBI on the offices of NDTV and its promoters. “Entry of the police and other agencies into the media offices is a serious matter. NDTV, in various statements, has denied any wrong doing and termed the raids as stepping up the concerted harassment of the news channel and an attempt to undermine democracy and free speech and silence the media. While the Editors Guild maintains that no individuals or institution is above the law, the Guild condemns any attempt to muzzle the media and calls upon the CBI to follow the due process of law and ensure there is no interference in the free functioning of news operations,” said the Editors Guild in a statement issued on Monday.