India   All India  06 May 2020  Pick and choose policy on corona puts doctors' lives at risk
India, All India

Each state interpreting the ICMR's guidelines in its own way 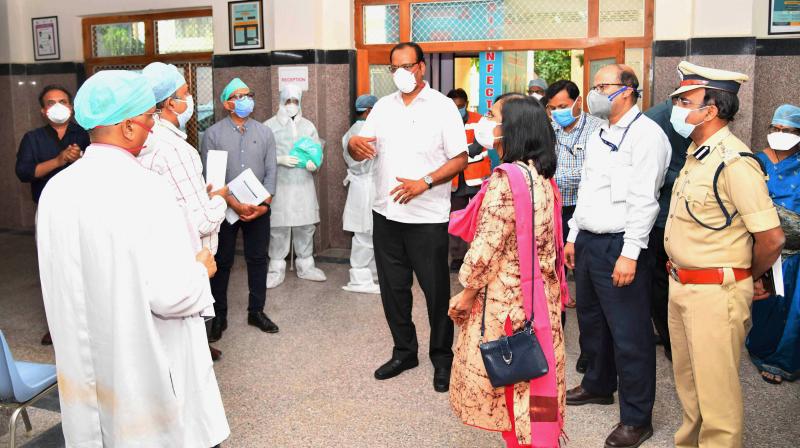 Hyderabad: The approach of various state governments to testing patients for the novel coronavirus has become a bone of contention between doctors and state administrations.

The medical fraternity is in utter consternation given that different states are interpreting the guidelines of the Indian Council of Medical Research (ICMR) according to their respective comfort level. There is no standardised method being followed, say doctors.

In other words, India’s states are following a “pick and choose” policy in tackling the Covid-19 pandemic.

Telangana for instance is testing in a way that has baffled the Inter-Ministerial Central Team (IMCT). In a virtual meeting with doctors, complaints were forwarded to the Union health minister and the state health minister.

In other states, testing by private hospitals has been marred by the use of faulty kits.

Dr K.K. Aggarwal, president of the Confederation of Medical Associations in Asia and Oceania, and former president of the Indian Medical Association, said, “Pre-operative testing in emergency and elective surgeries is very important for Covid-19. But the test results are 33 per cent negative. Doctors and hospitals cannot take risk with these kits. We must be provided quality kits and there must be one rule applicable across the country.”

Dr Aggarwal added, “The Union government should have declared a National Health Emergency, which they have not done. It was a big mistake. Every state is following its own rules and regulations. They are not following guidelines as is required to control and contain Covid.”

Health is a state subject and the Centre can only advise them. This lacuna is being exploited by state governments, which has put the medical fraternity at risk. Due to the non-availability of personal protective equipment (PPEs) and testing kits, doctors have decided that no elective surgeries will be carried out.

“Even if one patient who is Covid positive undergoes an operation, the surgeon, paramedical staff and operation theatre will have to shut down for 28 days, which is a huge risk. The infection rate from patient to doctors and staff is very high,” said a doctor.

While Telangana has rejected over 200 samples sent for those in the pre-operative stage last week, doctors have been put at risk as they cannot refuse an emergency patient. This has increased the cost of surgeries, as PPE charges are separately billed to patients.

State governments have told doctors that “insisting” on a Covid-19 test for a non-Covid illness before operation or birthing is a “crime”. Medical experts have opined that “doctors can and should insist” on a Covid-19 test, as the test has an impact on treatment.

Dr Santosh Kraleti, a public health specialist, said, “guidelines from ICMR and learnings from Covid-19 affected countries have shown that he patient must be tested before every operation. We have had 400 births in April but no test was conducted. Patients came from containment zones and red zones, but they were operated in private and government hospitals without testing. This is going to have serious ramifications as it will lead to further spread.”

According to the Medical Council Act, doctors cannot refuse patients treatment and it is their duty to perform, even under the gravest circumstances. This has put them in a tricky situation.

Efficacy of testing kits is under the scanner and Indian manufacturers will take a month to supply products.

Earlier in March, when they were willing to manufacture, there was no assistance provided by the government. Over 80 per cent of them have imported kits from China and South Korea. Their capital has been blocked and due to inefficiency of kits they are not being paid by the government.

Rajiv Nath, forum coordinator, Association of Indian Medical Devices Industry, said, “Covid-19 patient’s serum required for preparing testing kit has not been given to us. The quality must be superior but pricing is an issue. Why will a manufacturer put so much effort in making the product when there is no return on investment? The on-going problems of lockdown continue to exist in the manufacturing sector, marked by non-availability of labour, supply chains are not completely operational and capital is very scarce as governments have not paid us for past one year. How is it possible to step in now with further capital?”