The historic structure raised to ward off recurring plague is itself plagued by various ailments now. 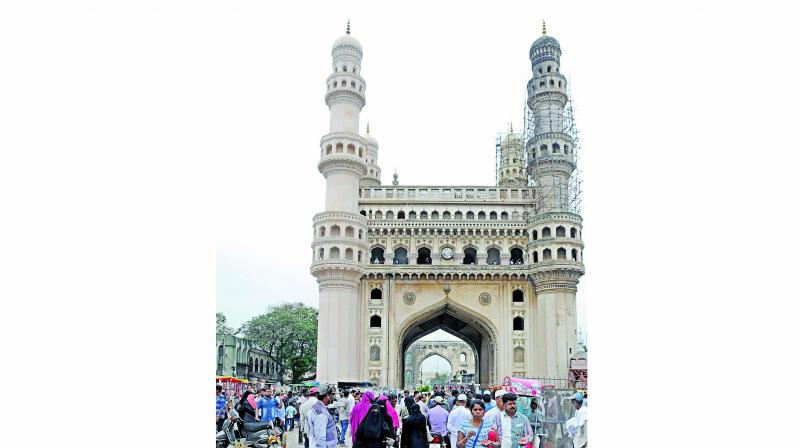 The restoration work at Charminar has been going on from some time. However, the project to restore the monument’s grandeur seems to be loosing its pace.

If heritage experts are to be believed Charminar has suffered damage more at the hands of the very agency tasked with its upkeep than the vagaries of nature. No wonder scaffolding has become a permanent feature at Charminar.

In recent past, crass negligence in erection of scaffolding resulted in chipping  away of tiny ornamental motifs. During August 2001 two niches on the south western minar of the monument suffered badly and the intricate jali work got smashed when the scaffolding was forced through them. The monumental neglect continues.

The project to restore the grandeur of Charminar is getting as hoary as the monument itself. More than two decades after the Charminar Pedestrianisation Project (CPP) was launched with much fanfare, the landmark  still awaits redemption. Though it has got respite in recent times from the relentless movement of heavy vehicles, an unhindered view of Charminar remains a pipedream.

The legendary edifice built in 1590-1591 has many stories associated with it. The 5th Qutb Shahi king, Mohammed Quli Qutb Shah, is believed to have gifted this lime-mortar structure to his sweetheart, Bhagmati. According to the author of Tuzk-i-Qutbshahi, Charminar was a prototype of Tazia or Taboot representing the tomb of Hazrath Imam Hussain, grandson of the Prophet of Islam. The plague was averted by fixing a huge Tazia in the centre of the city and later on the same spot Charminar was built, it is said.

There are also interesting urban myths about the monument. The four Minars of the edifice are believed to represent the four Caliphs of Islam. Grapevine has it that an underground tunnel connects Charminar to the Golconda Fort, probably an escape route for the Kings in times of emergency. A few years ago the Archaeological Survey of India took up excavation in a bid to unearth the tunnel but the trail ended a short distance away. 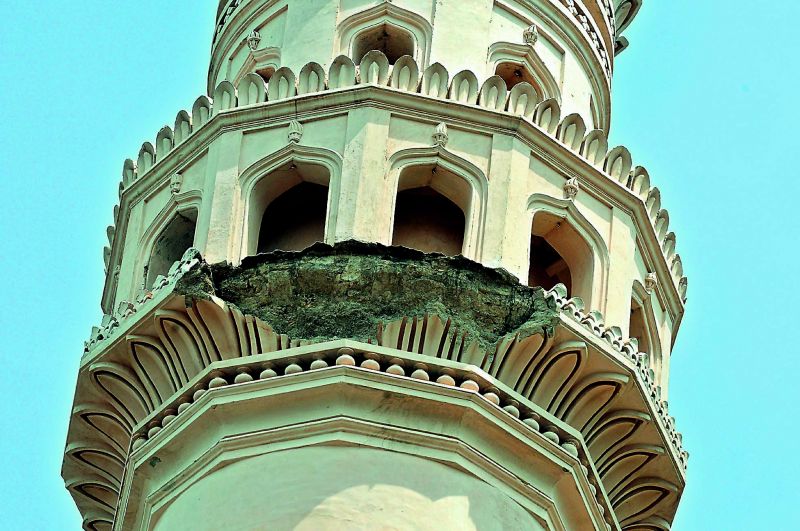 Some believe there is a mathematical wizardry behind the building of Charminar. The Char (four) has special significance in almost every aspect of this monument, says city historian M.A. Qaiyum. The number four in Charminar goes beyond its four slender minarets. His painstaking research shows that the monument has at least 40 notable facets the measurement of which is divisible by the number four. “And this not by coincidence but by design,” says Mr. Qaiyum.

The first structure to be built after the city was founded, Charminar was designed to occupy the centre of the city which is laid out in gridiron pattern. Subsequently other impressive edifices came up in its vicinity such as the Makkah Masjid, the Nizamia Tibbi hospital and the Chowmohalla palace.

There is unanimity among historians about Charminar being an acknowledged masterpiece of Islamic structure unique in its architectural form and typology. What strikes one about this four turreted  edifice is its pure symmetry. The lofty arches measure 11 m wide and 11.5 m high on all four sides. The graceful minarets rise 56 m from ground level and 34 m from the mosque on the second floor. They have arched balconies at three levels while bulbous dome with petal shaped flutings adorn the topmost balcony.

An arcaded balcony marks the first floor where a Madrasa functioned once. The mosque above it has space for as many as 45 musallas (prayer mats).

The 149 steps on the spiral staircase, which takes one to the top floors, shows signs of wear and tear. How much did this beautiful monument cost? Hold your breath — just Rs 9 lakh or 2 lakh huns (gold coins) those days.