Khalilzad has been holding talks with the Taliban to strike a deal to bring stability in Afghanistan. 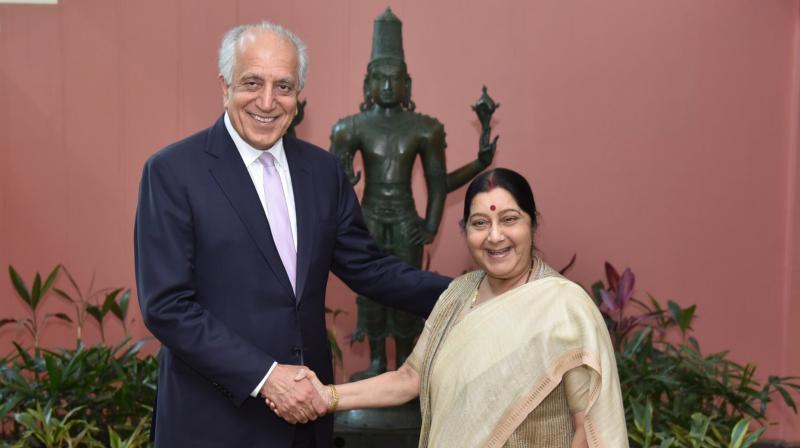 External Affairs Ministry spokesperson Raveesh Kumar said both sides discussed the role of all regional stakeholders in bringing peace and development to Afghanistan, adding India will work with key partners in the coming days.

Khalilzad has been holding talks with the Taliban in Qatar's capital Doha to hammer out a deal to bring lasting peace and stability to war-ravaged Afghanistan.

Appreciate Amb @US4AfghanPeace Khalilzad briefing EAM @SushmaSwaraj on peace efforts in Afghanistan in midst of ongoing Doha meetings. Both discussed role of all regional stakeholders in bringing peace & development in Afghanistan. India will work with key partners in days ahead. pic.twitter.com/Sw78HuV4xa

Last week, the US officials held their sixth round of talks with the Taliban to end the over 17-year-old conflict in Afghanistan.

In March, India conveyed to the US that it should not withdraw its troops from Afghanistan without putting in place an elected "political structure" to govern the country.

Major powers such as the US, Russia and Iran have been reaching out to the Taliban as part of efforts to push the stalled Afghan peace process.

India has been a key stakeholder in the peace and reconciliation process in Afghanistan.

In a significant move, India had sent two former diplomats in "non official" capacity to a conference on Afghan peace process in Moscow in November last year which was attended by a high-level Taliban delegation.

The conference organised by Russia was attended by representatives of Afghanistan as well as from several other countries, including the US, Pakistan and China.

India has been maintaining a policy of not engaging with the Taliban and pressing for an Afghan-owned and Afghan-led peace initiative to bring peace and stability in the war-ravaged country.