India   All India  06 May 2019  Priyanka takes more of my name than that of her husband: Smriti Irani
India, All India

Priyanka takes more of my name than that of her husband: Smriti Irani

Irani alleged that Rahul Gandhi is only concerned with his politics and doesn't care a bit about the poor and the needy of society. 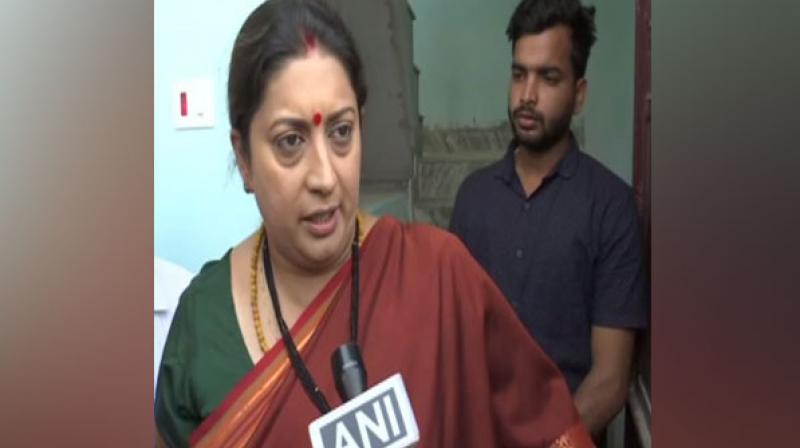 Irani asserted that this is no less achievement in itself as five years ago Priyanka Gandhi did not even know her name. (Photo: ANI)

Lucknow: As Amethi parliamentary constituency went in to polls in the fifth phase of the Lok Sabha elections on Monday, Union Minister and BJP candidate Smriti Irani hit out at opponent Congress President Rahul Gandhi for the death of a man in an Amethi hospital.

The Union Minister alleged that the Congress president Rahul Gandhi is only concerned with his politics and doesn't care a bit about the poor and the needy of society.

"Rahul Gandhi's hand is drenched in the blood of an innocent man who just wanted to get himself treated at the hospital whose trustee is Rahul Gandhi. He only wanted the hospital to treat him free, however, he was denied treatment as he was carrying Ayushaman health card given by Prime Minister Narendra Modi government," said Irani.

"The person died due to this, Gandhi family can do anything for their politics. Rahul Gandhi is not at all concerned with the poor and their welfare. Why is he keeping silent on the issue?" the union minister asked.

Irani had on Sunday alleged that the Sanjay Gandhi hospital in Amethi, where Rahul Gandhi and Congress general secretary Priyanka Gandhi are trustees, allegedly refused to treat a man just because he was a beneficiary of the central government's National Health Protection Scheme, a charge that was outrightly rejected by the hospital administration.

Irani also took a jibe at Priyanka Gandhi Vadra saying that nowadays the latter was invoking her name more than she did of her husband Robert Vadra. Irani asserted that this is no less achievement in itself as five years ago Priyanka Gandhi did not even know her name.

"Priyanka Gandhi didn't even know my name five years back, but now she only reiterates my name. How big an achievement is this in itself," said Smriti Irani.

"Priyanka Gandhi takes more of my name than that of her husband," said Irani.

Ayushman Bharat is the flagship healthcare scheme launched by Prime Minister Narendra Modi, which covers 10 crore poor families, and entitles them to avail treatment up to Rs 5 lakh at the tertiary level.

Irani is facing Rahul Gandhi from Amethi Lok Sabah seat which is undergoing polling today. Rahul Gandhi has been winning the seat since 2004. In the last Lok Sabha poll he defeated Irani in Amethi.