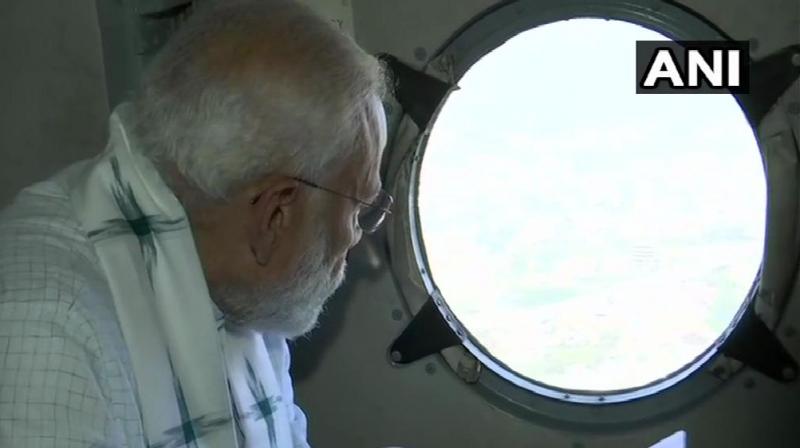 Bhubaneswar: Prime Minister Narendra Modi on Monday conducted an aerial survey to assess the loss and destruction caused by Cyclone Fani in Odisha. Modi was received by Governor Ganeshi Lal and Chief Minister Naveen Patnaik on his arrival at the Biju Patnaik International Airport here.

Modi, who has three rallies scheduled later in the day in West Bengal and Jharkhand, immediately proceeded towards his chopper to carry out the survey of the worst-hit Puri district and other affected areas.

At least 34 people were killed during Cyclone 'Fani', which barrelled through coastal Odisha on Friday last, causing widespread destruction and leaving hundreds grappling with water shortage and power cut.

The Prime Minister had on Sunday tweeted, "Will be in Odisha tomorrow morning, where I will review the situation due to Cyclone Fani and hold meetings with top officials. The Centre is committed to provide all possible assistance in relief and rehabilitation measures underway."

The PM also spoke to the chief minister on Saturday and discussed the situation in the aftermath of Fani, assuring continuous support from the Centre.

According to an official, Modi is scheduled to review the relief and restoration work in the state on his return from the aerial survey. The National Crisis Management Committee (NCMC), headed by Cabinet Secretary P K Sinha, had on Sunday reviewed relief measures in affected areas of Odisha, West Bengal and Andhra Pradesh.

He also wanted to do the same for West Bengal and the Govt of India had written to the State about a review meeting of PM with state government officials.

However, the state government has replied saying that the govt officials are busy with election duty and hence the review meeting should not be held.

The cyclone, the worst April storm in 43 years, caused "huge damage" in Bhubaneswar, Cuttack, Puri and Khordha districts in the state, according to the Odisha government.

PM Modi had announced that the Centre has released Rs 1,000 crore to Odisha and other states to deal with the devastation caused by Fani.