India   All India  06 May 2018  I&B Ministry may send national film awards to 50 'protesting' winners via post
India, All India

Many winners decided to 'boycott' the award ceremony over the president handing over the honour to only a select set of winners. 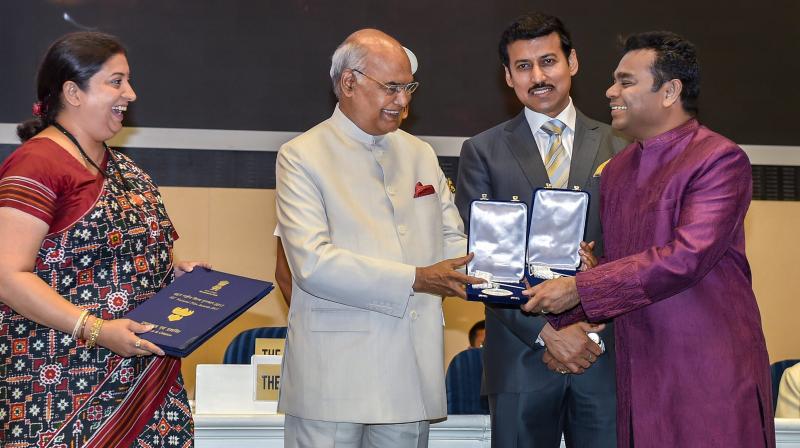 In a departure from tradition, the function, held at Vigyan Bhavan, was divided into two phases. (Photo: PTI)

New Delhi: The Ministry of Information and Broadcasting is contemplating to send the citations, medals and cheques to over 50 absentee awardees at the 65th National Film Awards this year, through post.

The National Film Awards were presented on May 3 in the national capital, but many recipients decided to "boycott" the ceremony over the president handing over the honour to only a select set of winners.

"The ministry is contemplating to send the National Film Awards to those who missed the function, through post. A decision regarding it will be taken soon," ministry sources said.

They said it was not a new practice to send the awards via post to those who missed the event due to any reason.

In a departure from tradition, the function, held at Vigyan Bhavan, was divided into two phases. The first set of awards was conferred by Union Information and Broadcasting Minister Smriti Irani and Minister of State Rajyavardhan Singh Rathore.

The murmurs of discontent over the new practice under which the president was not going to present the awards to each of the winners began to gain ground during the rehearsal of the ceremony on May 2 when the winners were informed about the change.

Traditionally, the president gives away all the National Film Awards.

Earlier, over 70 artistes, in an open letter, had said, that they were skipping the ceremony as they "felt dejected rather than honoured" on being informed at the last minute that the president would give away only 11 awards.