India   All India  06 May 2017  Four killed in ambush on Srinagar-Jammu road
India, All India

DG police, Shesh Paul Vaid, has confirmed one of the assailants has been killed in the police’s retaliatory fire. 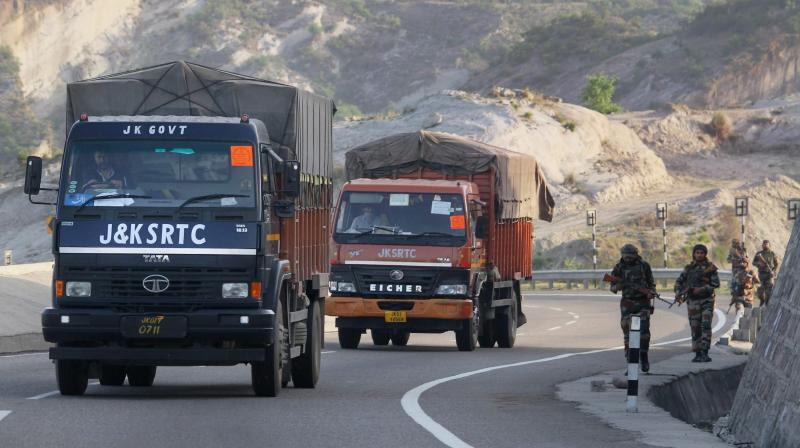 Security personal keep vigil as vehicles loaded with official documents travel to kashmir during Darbar move on the Jammu - Kashmir highway near Ban toll plaza, in the outskirts of Jammu. (Photo: PTI/File)

Srinagar: Several policemen and civilians were injured, three of them fatally, in a sneak militant attack at Mir Bazaar along the Srinagar-Jammu highway in Jammu and Kashmir’s Anantnag district on Saturday night. One militant was also killed and another has reportedly been injured who along with a third one fled the area.

The officials here confirmed that one policeman and two civilians were killed and a few other policemen and civilians were injured in the attack by a group of three militants. Another report put the number of casualties at four.

The police and locals said that the gunmen targeted a police party with AK assault rifles at Mir Bazaar near Malpora village in Qazigund area of Anantnag, injuring policemen and pedestrians.  The hospital sources said that one policeman and three others "who are yet to be identified but appear to be civilians" died soon after being brought there. However, another report said that two policeman and two civilians injured in the shooting have succumbed. The police officials in Srinagar said, ‘Our officers have rushed to the spot and are verifying the exact number of casualties and the victims’ identities”.  The police party was helping in clearing the vehicular traffic on the Srinagar-Jammu highway when attacked.

DG police, Shesh Paul Vaid, has confirmed one of the assailants has been killed in the police’s retaliatory fire.

Earlier during the day on Saturday, a 14-year-old boy was injured when the CRPF fired shotgun pellets in Churrat village of Qazigund.  The action came after groups of people hurled stones on a CRPF convoy while it was passing through the area. The boy identified as Zeshan Farooq Shah who was hit in the firing was reported sitting in the lawn of a roadside house.