India   All India  06 May 2017  Chhattisgarh police face flak for not helping in anti-Naxal operations
India, All India

Chhattisgarh police face flak for not helping in anti-Naxal operations

Chief Minister Raman Singh too was upset over lack of coordination between state police and CRPF in counterinsurgency measures. 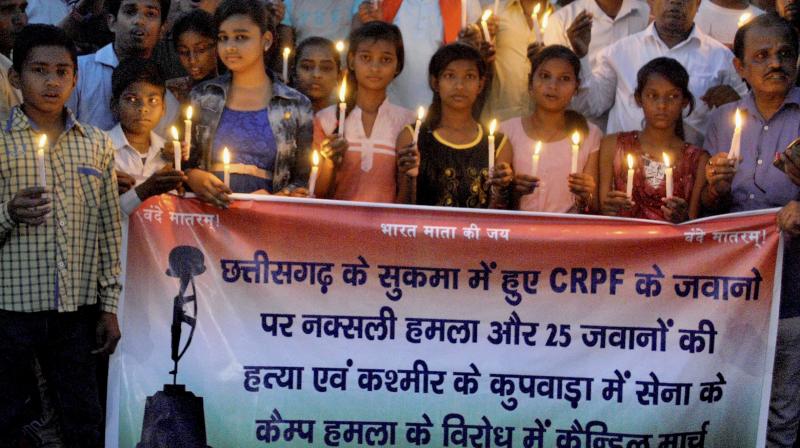 People and children at a candle light vigil in memory of the CRPF personnel, who were killed in the Sukma Naxal attack in Chattisgarh, in Patna. (Photo: PTI/File)

Bhopal: Senior security advisor in the Union home ministry K. Vijay Kumar on Friday pulled up the Chhattisgarh police for not extending cooperation to Central Reserve Police Force (CRPF) in counterinsurgency measures being undertaken in the conflict zone of Bastar.

Addressing a meeting of the unified command to discuss anti-Maoist strategy in the wake of the deadly Maoist attack in Sukma district recently, Mr Kumar said CRPF was not getting cooperation from the state police in anti-Naxal operations.

The unified command meeting, which was held at Raipur, was chaired by Chhattisgarh chief minister Raman Singh.

Incidentally, the unified command met after a gap of nearly 15 months, although it was supposed to meet every six months.

Mr Kumar also rapped on knuckles of the Chhattisgarh police for not heeding to advice to coordinate with the police of Telangana and Andhra Pradesh frequently to tackle Left-wing extremism.

Chief minister Raman Singh too was upset over lack of coordination between state police and CRPF in counterinsurgency measures.

Briefing the media at Raipur, a Chhattisgarh government spokesman said the chief minister has called for setting up unified operational command in each Naxal-hit district in the state to give a sharp edge to anti-Naxal operations.

According to the spokesman, the chief minister also suggested setting up joint training centres at Sukma and Bijapur in south Bastar in Chhattisgarh for combined training of state and Central forces.

The unified command meeting was convened in the wake of April 24 Maoist ambush on a CRPF party at Burkapal in Chhattisgarh’s Sukma district killing 25 jawans.