India   All India  06 Apr 2018  No work, only protests in Parliament: BJP MPs to fast, Congress boycotts tea
India, All India

No work, only protests in Parliament: BJP MPs to fast, Congress boycotts tea

Cong, BJP MPs stood facing each other outside Parliament with placards, screaming slogans and trying to out-shout other side. 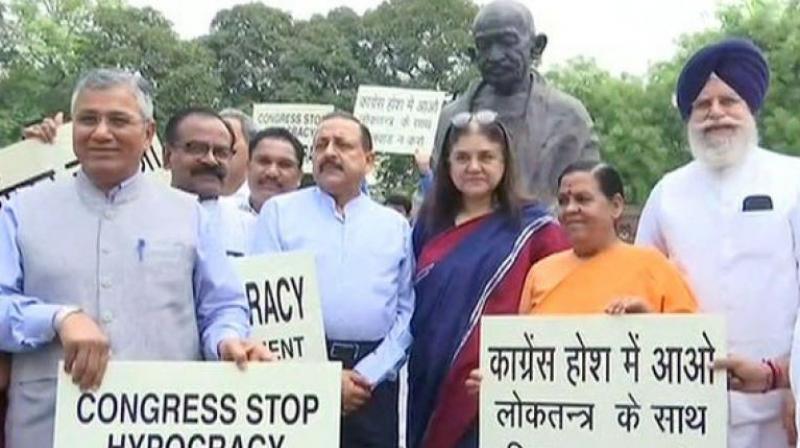 New Delhi: Moments after both the houses of Parliament were adjourned sine die amid protests and uproar, members of the ruling BJP-led coalition and the opposition Congress took their fight outside.

Members of Parliament of the BJP, including ministers, and those of the Congress, stood facing each other near the Gandhi statue in the parliament premise with placards, each side screaming slogans and trying to out-shout the other side.

BJP MPs have decided to observe a fast on April 12 to protest against the parliament logjam, said union minister Ananth Kumar.

"The Congress party is intolerant of the mandate given to (Prime Minister) Narendra Modi in 21 states," Union Parliamentary Minister Ananth Kumar told NDTV as he along with other BJP MPs marched across the parliament complex holding yellow posters and placards and shouting slogans.

The BJP accuses the Congress and UPA chairperson Sonia Gandhi of disrupting parliament.

The Opposition parties also staged a protest near the Gandhi statue on Thursday and held the government responsible for disruption of the Parliament. Sonia Gandhi and Congress president Rahul Gandhi too participated in the protest.

For the first time, Congress leaders stayed away from tea hosted by Lok Sabha Speaker Sumitra Mahajan on Friday morning, protesting against the way the disruptions in the house were handled.

The ruling party and the Opposition confrontation highlight sharp battle lines in a year of elections, especially the polls in Congress-ruled Karnataka on May 12.

Parliament's budget session was a near washout as both houses were adjourned without much progress after daily disruptions and protests.

During the session till now, the Lok Sabha has passed 21 bills and the Rajya Sabha 14 bills. They include the Enemy Property (Amendment and Validation) Bill, The Mental Health Care Bill, The Maternity Benefits (Amendment) Bill, The Payment of Wages (Amendment) Bill, 2017 and the crucial four supporting bills for the roll out of the Goods and Services Tax.