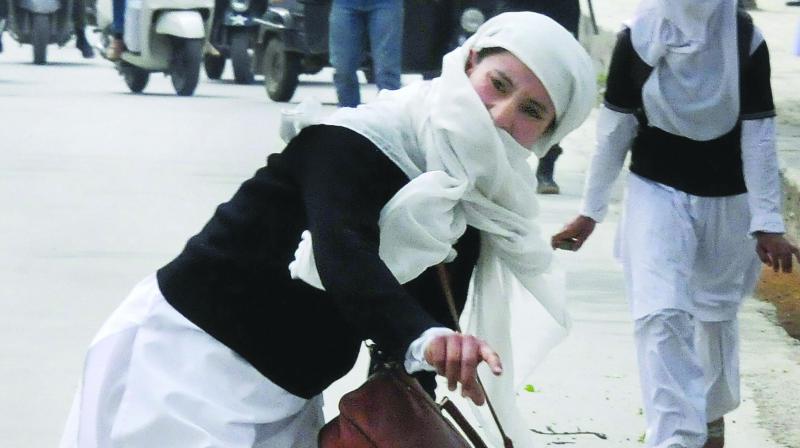 Women's college students hurl stones at police personnel during a protest against the recent killings of civilians at Lal Chowk in Srinagar. (Photo: PTI)

Srinagar: After remaining shut for four days over the killing of 13 militants and 5 protesters in the security forces’ stepped up counterinsurgency measures, normal life limped back to normalcy in most parts of Kashmir Valley on Thursday.

Marketplaces reopened, the train services resumed and public transport services were back on the roads. Barring a few areas including southern Shopian where sixteen of the eighteen deaths had taken place in two separate encounters and security forces firing on protesters, educational institutions also reopened.

But at several colleges and two universities, the students instead of reporting to their classes held protests against the killings. In summer capital Srinagar, southern Pulwama, Sumbal and Pattan in Baramulla and Handwara and Kupwara area of frontier Kupwara district, the students of various colleges took to the streets where they clashed with the police and central paramilitary forces, the witnesses said.

The security forces fired dozens of teargas canisters to quell violent student mobs. The students of Srinagar’s Amar Singh College torched a police picket near the campus and then marched towards the City centre Lal Chowk. A police official said that the protesting students relocated to Sher-i-Kashmir Indoor Stadium near their college and then torched a picket of the J&K police. No one was manning the picket when attacked, the witnesses said.

The students of Srinagar’s Government Degree College at Bemina and Islamia College at Hawal also held protests and then clashed with the police.

A police spokesman said that “utmost restraint” was exercised by the policemen and central forces while dealing with the irate crowds of students.

Students of Kashmir University at Hazratbal and Central University of Kashmir (CUK) also protested against the civilian and militant killings in south Kashmir. They held protests inside the campus and the placards they were holding said “Stop genocide of Kashmiri youth” and “Leave Kashmir before it is too late for you.”