Swaraj asserted in the Lok Sabha that it would be wrong to think that India will let go of any part of its territory. 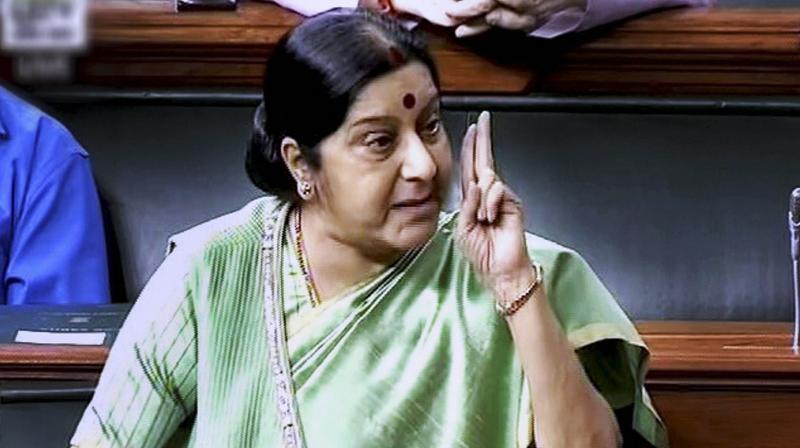 New Delhi: External affairs minister Sushma Swaraj on Wednesday slammed Pakistan’s move to declare Gilgit-Baltistan as its fifth province and said the whole of Jammu and Kashmir, including areas under Pakistan’s occupation, is Indian territory.

Ms Swaraj asserted in the Lok Sabha that it would be wrong to think that India will let go of any part of its territory.

The minister’s response came after the issue was raised by Biju Janata Dal member Bhartruhari Mahtab during Zero Hour.

He questioned the government response to Pakistan’s move, and said both the Lok Sabha and the Rajya Sabha should pass a resolution to condemn the development.

“The Pakistan government has unilaterally decided to declare Gilgit-Baltistan as its fifth province. At the time of Partition, a British political agent in charge of Gilgit and Baltistan allowed Pakistani soldiers to take over the area, even though Indian Constitution recognises Gilgit-Baltistan as an integral part of our country,” Mr Mahtab said.

Noting that some countries had criticised Pakistan, and that the British Parliament had recently passed a resolution condemning Islamabad’s move, saying the region is part of Jammu and Kashmir, and illegally occupied by Pakistan since 1947, he asked, “What is our government’s response?”

In her response, Ms Swaraj said that India rejects Pakistan’s move, adding that the government’s stand on Jammu and Kashmir being an integral part of India should not be doubted.

The Indian government, she said, had opposed Pakistan’s move the very day it got to know about it.

“This government has always said that Kashmir, where (Bharatiya Jana Sangh founder Shyama Prasad) Mookerjee was martyred, is ours. There should be no doubt,” she said.

“Even raising a doubt over this government that it will let go of some area will be wrong,” she added, according to news agency reports.

She noted that both Houses of Parliament had passed resolutions reiterating India’s claim over the PoK, including Gilgit-Baltistan, and the government was bound by it. “We are bound by Parliament’s resolutions and also our resolve,” she said.

A ministry statement last month reacted strongly to Pakistan’s move on the Gilgit-Baltistan region, saying it is “entirely unacceptable”.