India   All India  06 Apr 2017  MPs can't fulfil duties if there is ban on flying: Mahajan
India, All India

MPs can't fulfil duties if there is ban on flying: Mahajan

Mahajan also had expressed her displeasure over the behaviour of Shiv Sena MPs inside the House, saying it is 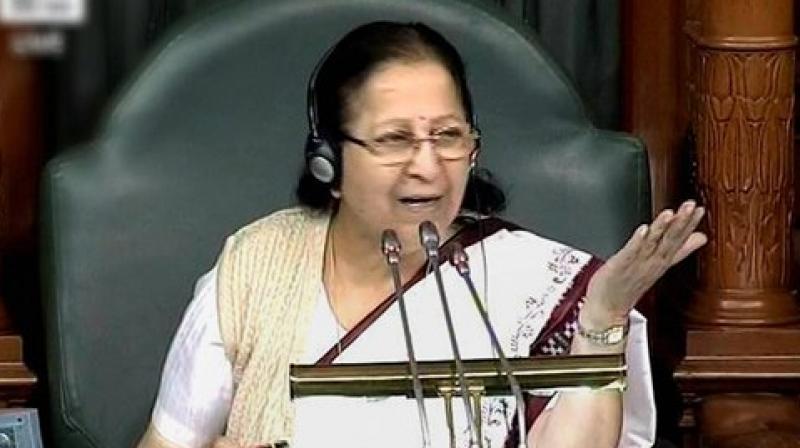 "I am not a judge and cannot pass judgement on this issue. But, the matter should be resolved amicably," Mahajan told reporters outside Parliament.

"MPs have to come to Parliament. Saturday and Sundays are off so many times. MPs have to go for meetings and it is not possible to travel by train to those places and come back.

"So one has to take flights; if there is a ban on flying, then an MP cannot fulfil his/her duty. No matter should be prolonged for so long. Whatever enquiry has to be conducted, it should be done and a conclusion should be reached," she said.

After the chaos, the Speaker held a meeting with TDP parliamentarians, including Raju, and Shiv Sena MPs, including Geete.

According to TDP sources, during the meeting, Mahajan expressed her displeasure over the behavior of Shiv Sena MPs inside the House, saying it is "not acceptable".

The matter of fly ban should be looked into and both sides have decided to sit together and amicably resolve the matter at the earliest. Gaikwad spoke in details about the incident in the House and also asked the fly ban be revoked, the Speaker said.

The civil aviation minister said rules are same for everybody, including MPs. But, everyone was angered as they were expecting a solution from the minister, Mahajan said.

"That is why there was a chaos. I adjourned the House as I could not understand anybody's point.

"Later, all of us sat together. It was decided that the issue cannot be resolved in Parliament. It will be resolved only after both the sides discuss the matter," she said.

After the meeting with the Speaker, TDP, as well as Shiv Sena leaders met separately to discuss the matter.

Earlier, Gaikwad tendered an apology to Parliament but insisted that he owed no apology to the airline officials as he sought removal of the ban imposed on him by domestic airlines after he allegedly beat up an Air India officer with slippers.