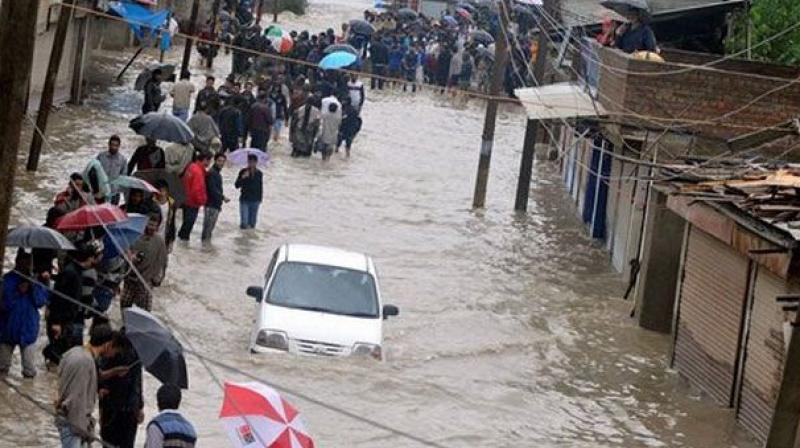 Srinagar: A flood advisory asking people to remain vigilant was on Thursday issued for those living in south and central Kashmir after a rise in the water level of River Jhelum and its tributaries.

Jhelum has crossed the 'alarm level' of 18 feet at Sangam in Anantnag district, officials said.  "We have issued the advisory after the water level in River Jhelum crossed the 18 feet mark at Sangam," a senior official of the Irrigation and Flood Control department said.

The 2014 floods had caused widespread destruction in the valley as more than 300 persons were killed in the deluge that struck in the month of September.

According to MET department officials, Srinagar received 83.9 mm rain and snowfall over the past 24 hours while Kokernag in south Kashmir received 69.9 mm of rains in the corresponding period.

Pahalgam, also in south Kashmir, recorded rainfall of 64.2 mm of rains in the past 24 hours, the officials said. The incessant rains have forced closure of the arterial Jammu-Srinagar National Highway as the downpour has triggered landslides and shooting stones at several places along the 300-km road.

Massive traffic jams were witnessed in many parts of the city as the road were inundated as drains were overflowing.

The divisional administration has pressed into service pumps and fire tenders to dewater the city roads. The authorities have also closed down all schools in the valley till Sunday in view of the rain and snowfall at this time of the year.

The University of Kashmir and Islamic University have postponed all examinations for the day. The Health Department has directed all district and block level officers to prepare for exigencies in case of flood.