Singh claimed that NTRO system had informed about presence of around 300 active phones at site before air strike by India. 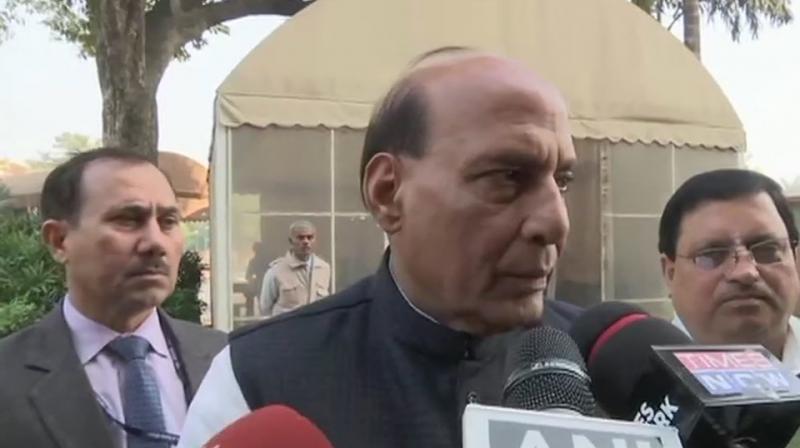 Singh claimed that the National Technical Research Organisation (NTRO) system had informed about presence of around 300 active mobile phones at the site before the air strike by India. (Photo: File)

New Delhi: Union Home Minister Rajnath Singh on Tuesday lashed out at opposition parties for seeking clarification on the number of deaths of terrorists in the Indian Air Force strike at Jaish-e-Mohammed’s terror in Pakistan.

Singh said those raising the question should go to Pakistan and count the bodies.

Singh claimed that the National Technical Research Organisation (NTRO) system had informed about presence of around 300 active mobile phones at the site before the air strike by India.

“Why are you asking us? NTRO, which is an authentic Indian surveillance system, has stated that when IAF jets struck the area with bombs, there were 300 mobile phones active there prior to the attacks,” Singh said, adding “Were these phones being used by trees in that area? Or will you now say that we don’t believe in the NTRO either.”

Addressing a public meeting in Assam’s Dhubri said, “Should our IAF pilots have visited the sites of the strikes and counted those killed? What kind of drama is this? If our friends in Congress want numbers, I would ask them to go to Pakistan and count. Ask people there how many people were killed by our IAF pilots.”

The Indian Air Force carried out a strike at Jaish terror camp in Pakistan on February 26 in the aftermath of Pulwama attack. Atleast 40 CRPF jawans were killed in the terror attack in Jammu and Kashmir.

“Some leaders of the other political parties are asking how many terrorists were killed in the IAF strike. Today or tomorrow, it will be known. Pakistan and their leaders’ heart know how many were killed,” Singh added.

He was on a visit to the Indo-Bangla border where he inaugurated a ‘smart fencing’ project and said, “If needed we will go to ‘paataal’ (underneath the Earth), search them (terror bases) there and take them to task.”

However, no information on the number of JeM terrorists killed in the strikes by 12 IAF Mirage 2000 jets have been released by the government, the figure of 250-300 deaths has been cited.

Defence Minister Nirmala Sitharaman on Tuesday said the government has already made its position on the casualty figures clear in a statement by Foreign Secretary Vijay Gokhale on the day the air strike took place. However, Gokhale had not given any casualty figures.