Pakistan had released video footage which it claimed was an Indian submarine. 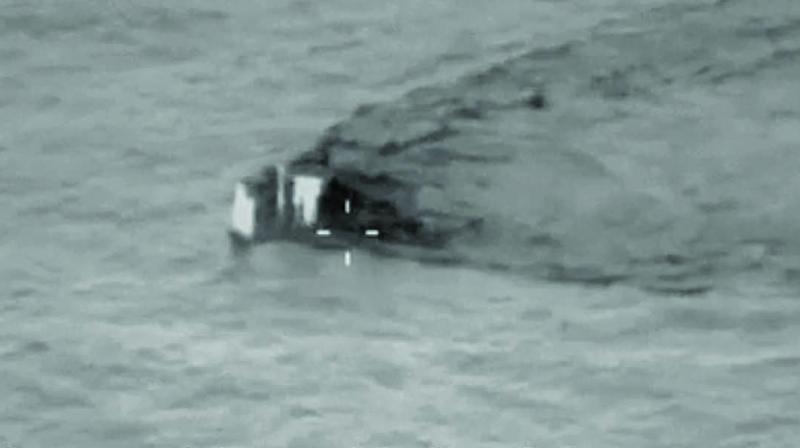 An image released by the Pakistan military on Tuesday shows what they claim is an Indian submarine approaching its territorial waters in the Arabian Sea. However, India said the footage that Islamabad shared dates back to November 2016. (Photo: AP)

New Delhi: The Indian Navy on Tuesday termed as “false propaganda” Pakistan’s claim that it had “blocked” an Indian submarine from entering its territorial waters. “Over the past several days, we have witnessed Pakistan indulging in false propaganda and spread of misinformation. The Indian Navy does not take cognisance of such propaganda,” the Indian Navy said in a statement. It said the Indian Navy is deployed as necessary to protect national maritime interests. “Our deployments remain undeterred,” it added.

Pakistan had released video footage which it claimed was an Indian submarine. Indian sources, however, said it was an old footage which had also been released by Pakistan in 2016. The sources explained that submarines sometimes have to surface in order to recharge their battery, and it was possible that the old video may have been filmed at such a time.

The Indian Navy is deployed all over in international waters, said sources when asked if the Navy had been deployed near Pakistan’s waters.

The Pakistan Navy claim came amid the latest flareup between the two nuclear-armed neighbours after the Pulwama terror attack killed over 40 CRPF jawans that resulted in India carrying out airstrikes at a Jaish- e-Mohammed training camp in Balakot.

Earlier in the day, the Pakistan Navy had claimed it had “detected and blocked a Indian Navy submarine from entering into Pakistani waters”. The statement said the Indian submarine was detected and localised in Pakistan’s maritime zone on March 4. “The submarine could have been easily engaged and destroyed had it not been Pakistan’s policy to exercise restraint in the face of Indian aggression and to give peace a chance to prevail,” said the Pakistan Navy statement. It said the Indian submarine was being kept under watch along with monitoring of other Indian Navy units. “The detected submarine is one of the latest submarines of the Indian Navy,” the Pakistani statement added.