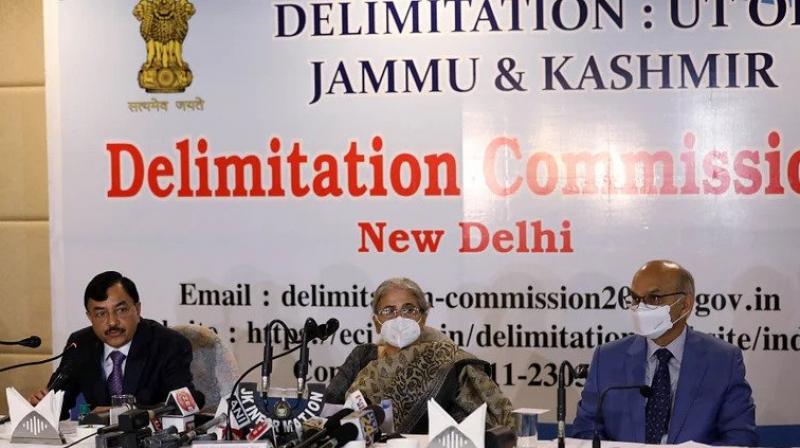 SRINAGAR: The Delimitation Commission for J&K late Friday evening shared the second set of draft recommendations with all the five MPs of the Union Territory who are its associate members, seeking their views, suggestions and objections by February 14.

As the commission has reportedly proposed major changes in Assembly constituencies, including the creation of new segments and redrawing of the existing ones, main Opposition party National Conference (NC) has outright rejected the draft recommendations. Terming them as “unacceptable”, party spokesman Imran Nabi Dar told a hurriedly called press conference here on Saturday, “Our recommendations vis-à-vis the first draft have clearly not been taken into consideration and, therefore, the NC rejects the 2nd draft.”

Party MP Justice (retired) Hasnain Masoodi complained that the commission has thrown the recommendations put forth by the NC to the wind and gone by its own will and wish. He said, “The changes sought by the panel in the second draft proposal are totally unconstitutional. We had put forth some important suggestions and recommendations but, unfortunately, these have been completely ignored and thrown to the wind,” he said. Mr Dar alleged that the draft proposal suggesting the creation of new constituencies and redrawing of others has apparently been determined by a “particular agenda”.

The commission had in its first draft recommendations proposed six additional Assembly seats for Jammu region and one for the Kashmir Valley while reserving nine constituencies for Scheduled Castes and seven for Scheduled Tribes, but various Kashmir-centric political parties had termed it as “totally unacceptable”. They had accused the commission of allowing the “political agenda of the BJP to dictate its recommendations”.

However, the BJP had called the commission’s proposals a “path-breaking initiative and a defining moment for the political empowerment of marginalised segments of J&K.” It also said that the draft recommendations had rekindled a ray of hope among all those who, it claimed, have suffered the ignominy of exploitation and discrimination due to unjust political manoeuvring over the decades as governance remained hegemony of chosen few.

The Delimitation Commission set up on March 6, 2020, by a law ministry notification was initially asked to examine the issue of redrawing the Lok Sabha and Assembly constitutions simultaneously in J&K, Assam and some other North-Eastern states. But later, when the commission had already laid the groundwork to start the delimitation exercise in these states, the government excluded Assam, Arunachal Pradesh, Manipur and Nagaland from its purview for the time being, raising many eyebrows in J&K and beyond. The Centre also extended its term by one-year in March last year.

Headed by former Supreme Court judge Ranjana Prakash Desai, the commission had said in July last year that the responsibility assigned to it was somewhat convoluted and not merely a mathematical game. It, however, assured that the exercise it has taken up will be “very transparent” and had asked the people, political parties, and other stakeholders in the UT to thrust aside all their fears and apprehensions.

It had also announced that the delimitation will be conducted based on the 2011 census and the final draft prepared after taking all demands and recommendations into account. Also, the final draft will be put in public domain for objections and debate, it had assured.