India   All India  06 Feb 2020  Two IEDs recovered in Guwahati, a day before PM’s mega rally in Assam
India, All India

Two IEDs recovered in Guwahati, a day before PM’s mega rally in Assam 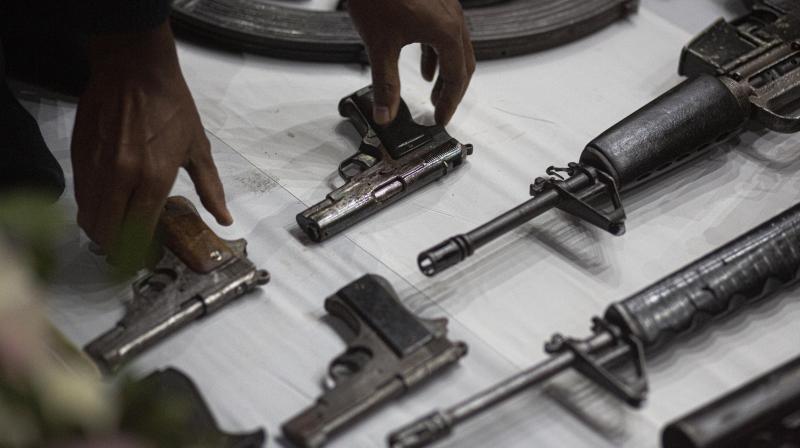 Assam police personnel arrange arms swurrendered by the cadres of the National Democratic Front of Bodoland (NDFB) in Guwahati on Jan. 30, 2020 after the signing of the Bodo peace accord between Bodo militant groups and the central government. (AP)

Guwahati: Security for the Prime Minister’s visit to Assam on Friday has been further heightened after the Assam police on Thursday recovered two low-intensity improvised explosive devices (IED) from two commercial hubs of Guwahati.

The PM is going to Kokrajhar to grace the celebrations of the Bodo Peace Accord.

Security personnel said they tracked down the two IEDs to Pan Bazar and Paltan Bazar areas of Guwahati on the basis of information provided by an Ulfa (I) supporter who was arrested by the police in Upper Assam’s Tinsukia district. He supposedly claimed to have been ordered to plant six IEDs.

Four of these IEDs were planted, packed in plastic bags, in Upper Assam and went off on Republic Day, January 26. The remaining two were set up on February 1 but they failed to blast.

The bomb disposal squad has removed them to the Panikhaiti area where they will be triggered.

Guwahati police commissioner Munna Prasad Gupta indicated that the IEDs were placed by Ulfa (I) cadres, perhaps to signal the group’s relevance to peace in Assam.

On Wednesday, the police recovered five suspected hand-made bombs from a place in Chhaygaon in Kamrup (Rural) district. The bombs were later defused at Kukurmara area in Chhaigaon.

The detection of explosive devices a day before the prime minister’s visit has set off rippls of concern in security circles although they ruled out any connection with the PM’s visit.

The Kokrajhar rally is being billed as one of the biggest in Assam’s history, and a “thanksgiving” event to celebrate  the January 27 Bodo peace accord between the Centre, the state government and different factions of Bodo rebel groups backed by powerful All Bodo Students Union (Absu). The venue is 220 km west of Guwahati.

More than four lakh people from the Bodoland Territorial Area Districts (BTAD) and other parts of Assam are likely to attend the rally, ferried there on four special trains. The state government has declared a holiday in the Bodo autonomous areas on Friday.

The ‘thanksgiving ceremony’ at the Jangkhrithai Fwthar Ground in Kokrajhar is being organized by nine Bodo organisations, including four factions of National Democratic Front of Bodoland.