Gurgaon cocker spaniel India’s first dog to get a pacemaker

The seven-year-old’s heart had been functioning at just four per cent of its capacity. 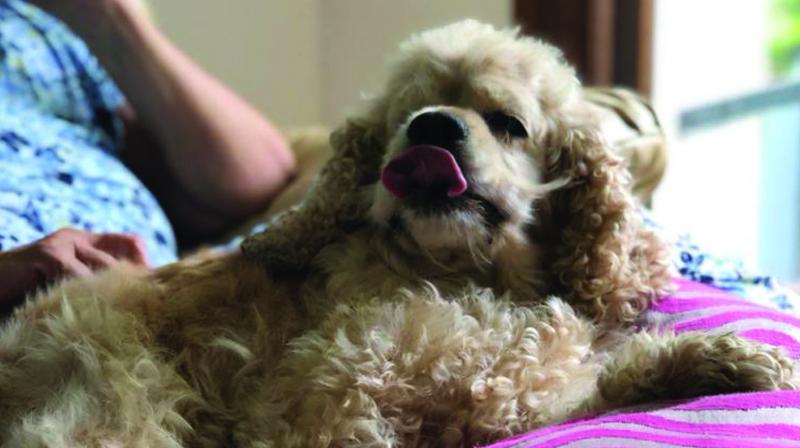 Seven-and-a half-year-old Khushi, a gentle, light gold coloured cocker spaniel, has become the first dog in India to have a customised, paediatric pacemaker to regulate her heartbeat and give her a new lease of life. Her heart was functioning at just four per cent of its capacity and it seemed a miracle that she was alive.

The pacemaker was installed after one-and-a-half hours of surgery at Max Vets Hospital, Greater Kailash 1, by  its interventional cardiology team for small animals, Dr Bhanu Dev Sharma and Dr Kunal Dev Sharma. Since this kind of surgery had never been done in India before there was a great deal of planning and preparation. Vets in India and abroad were consulted and the paediatric pacemaker was imported. A complete heartblock or third degree AV block is almost like a ticking time bomb, say its owner Bulbul Kumar and her son Manu. It was a tough call, says Manu but the doctors were confident.

Dr Bhanu holds a master’s degree in small animal cardiology from the University of Luxembourg and developed his expertise in interventional cardiology procedures with intensive training in the U.S. and Europe. Dr Kunal is a renowned small animal surgeon and also one of the few Indian veterinarians to have earned a membership to the Royal College of Veterinary Surgeons, UK, but neither had done this specialised interventional cardiac surgery.

Khushi, who is inseparable from her two buddies, Hassi, a black cocker spaniel and Sunheri, a white and brown Siberian Husky, was kept at home and her walks curtailed till the pacemaker was fitted. On December 15, with several vets and even a representative from the National Institute for Heart looking on, Khushi got her pacemaker. It all worked well. Khushi had added a new chapter in India’s dog cardiology history and is today prancing around with her buddies in her Gurgaon home.

Manu recalls that initially they thought that Khushi was just a lazy dog. It was only during an ear surgery in February 2019 when Khushi collapsed that doctors realised she had a more serious problem. After she recovered from the ear surgery, various tests were conducted revealing her heart was working at four per cent of its capacity. Complete heartblock had made her extremely lethargic and predisposed to episodes of syncope or temporary loss of consciousness due to insufficient flow of blood to the brain. This occurs most often when the blood pressure is too low and the heart does not pump enough oxygen to the brain.

Even in the US and Europe this kind of surgical intervention may not be that frequent.  In India, though the number of dog lover is growing, the cost of the surgery could put you off. The pacemaker for Khushi cost `75,000 and the remote monitoring device another `75,000. Every week Manu is able to send Khushi's heart report to her doctors with the help of the monitor. “I just put it near her heart and the vets in Kailash Colony get a six/seven pages detailed heart report.” Later the weekly report may be reduced to once a month.

Highly qualified vets, the latest technology like the customised pacemaker and monitor and the love of the owners for their precious dog have given Khushi the bounce back to an active life.