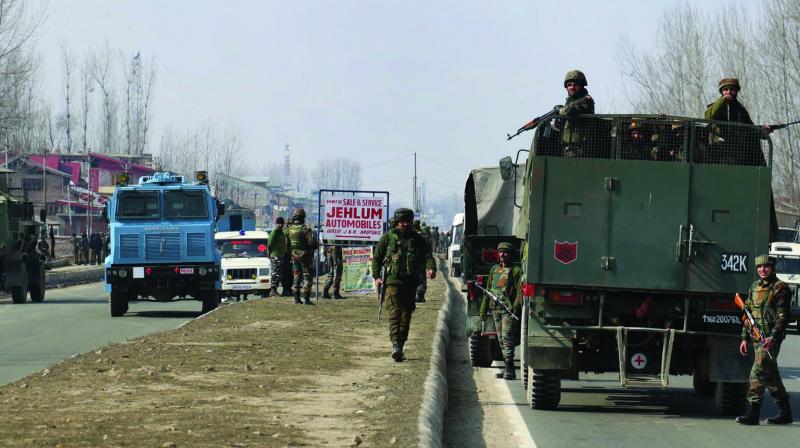 Security forces at the shootout scene at Lawaypora, near Srinagar, on Wednesday. (Photo: HU. Naqash)

SRINAGAR: The security forces on Wednesday shot dead two militants and arrested the third one during a brief encounter on the peripheries of Jammu and Kashmir summer capital Srinagar.

A jawan of Central Reserve Police Force (CRPF) was also killed during the clash.

The slain militants have been identified as Khateeb Ahmed Dass and Zia-ur-Rehman Wani, residents of the Valley’s southern Anantnag and central Budgam districts, respectively. Their accomplice who was injured in the clash is Umar Fayaz, a resident of Chattabal area, the police said.

The officials identified the CRPF jawan who laid down his life while fighting the militants at Lawaypora along the Srinagar-Baramulla highway as constable Ramesh Ranjan of the 73rd Battalion of the force.

The police said that the militant trio targeted a joint naka party of the CRPF and J&K police at Lawaypora at around 11.45 am, killing one jawan of the force.

“In the retaliatory fire, two terrorists were killed. One of them, Khateeb Dass, was affiliated with proscribed Hizb-ul-Mujahideen and the other Zia-ur-Rehman with Lashkar-e-Tayyaba,” it said.

The police sources said that the third militant Umar Fayaz is associated with the Islamic State’s India cell ‘Wilayat-e-Hind’. A report said that he succumbed to his injuries at the hospital, but the authorities neither confirmed nor denied it.

J&K director general of police Dilbag Singh said that it is possible that the militant group had planned a major terror strike in the city of Srinagar.

He told a hurriedly called press conference that the encounter at Lawaypora started after the three bike-born militants opened fire at the members of the 73rd Battalion of the CRPF who were posted at a mobile checking unit in the area.

He said that while two of them were killed in the retaliatory fire, the third was captured in an injured condition while he was trying to flee.