Centre and BJD dispensation in state have 'failed to work' for welfare of dalits, tribals, farmers and poor. 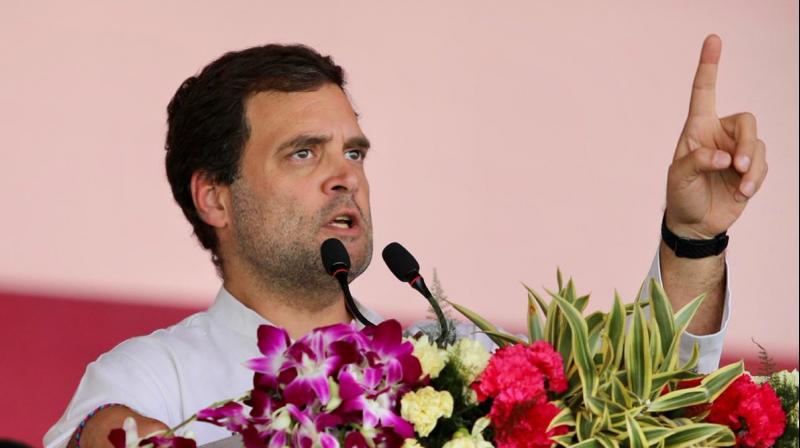 This was Gandhi's second visit within 10 days in the state where Assembly and Lok Sabha polls are scheduled to be held together. (Photo: Twitter | @INCCongress)

Addressing a rally at Bhawanipatna, among the backward regions of the state, Gandhi said the BJP-led government at the Centre and the BJD dispensation in the state have "failed to work" for the welfare of the dalits, the tribals, the farmers and the poor.

"The Congress is the only party committed to safeguarding the land of tribals. We will protect the rights of tribals in Odisha and elsewhere," he said.

This was Gandhi's second visit within 10 days in the state where Assembly and Lok Sabha polls are scheduled to be held together. Gandhi had addressed a rally at Bhubaneswar on January 25.

In stinging attacks on the BJP and the BJD, Gandhi said the two parties are working for the "benefit of their industrialist friends" while "neglecting" the farmers and poor people. The Modi government readily waived Rs 3.5 lakh crore loans of 15 industrialists, but refused to waive farm loans, he alleged.

Despite its promise, the BJP-led government has "failed" to provide remunerative prices to farmers for their produce in order to mitigate their plight, the Congress president alleged. Gandhi alleged that Naveen Patnaik failed to work for the benefit of farmers in Odisha.

The Congress president said that within two days of forming governments in Chhattisgarh, Madhya Pradesh and Rajasthan, farm loans were waived by the Congress governments in these states. He also accused the "Chowkidar" (PM) of being "corrupt" and charged Naveen Patnaik with being "remote controlled" for chitfund scams.

The Congress has decided that land acquired for setting up industries would be returned to the farmers if projects fail to take off within a period of five years of land acquisition, he said. The Congress chief said work in this regard has already started in Chhattisgarh.