GSAT-31 is the country's 40th communication satellite which is configured on ISRO's enhanced 'I-2K Bus'. 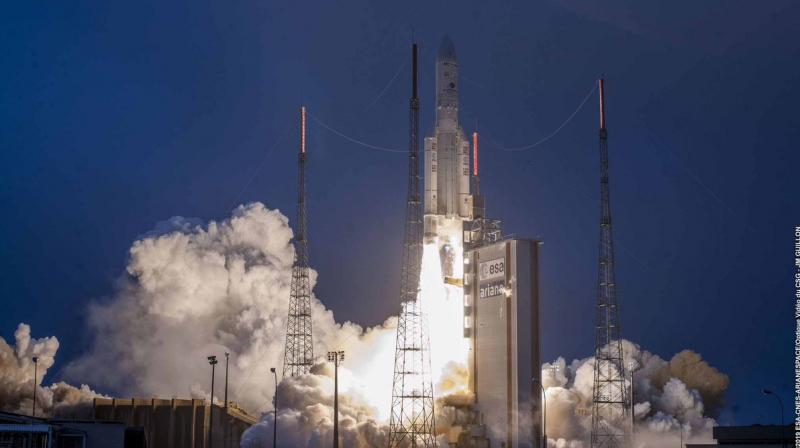 The GSAT-31 is a 'high power' communication satellite with Ku-band, and it is going to serve and replace some of the satellites that are going to expire soon. (Photo: @isro | Twitter)

Blasting off from Ariane Launch Complex at Kourou, a French territory located in northeastern coast of South America at at 2.31 am (IST), the Ariane-5 vehicle injected GSAT-31 into the orbit in a flawless flight lasting about 42 minutes.

"Congratulation to Arianespace on the successful launch and precise injection of satellite into the orbit," he added. The GSAT-31 is a "high power" communication satellite with Ku-band, and it is going to serve and replace some of the satellites that are going to expire soon, he said further.

The Ariane-5 vehicle (Flight VA247) also carried Saudi Geostationary Satellite 1/Hellas Sat 4 along with GSAT-31. GSAT-31 separated from the Ariane-5 in an elliptical Geosynchronous Transfer Orbit with a perigee (nearest point to Earth) of 250 km and an apogee (farthest point to Earth) of 35,850 km, inclined at an angle of 3.0 degree to the equator, ISRO said in a release after the launch.

After separation from Ariane-5, the two solar arrays of GSAT-31 were automatically deployed in quick succession and ISRO's Master Control Facility at Hassan in Karnataka took over the command and control of GSAT-31 and found its health parameters normal, it said.

In the days ahead, scientists will undertake phase-wise orbit-raising manoeuvres to place the satellite in Geostationary Orbit (36,000 km above the equator) using its on-board propulsion system.

During the final stages of its orbit raising operations, the antenna reflector of GSAT-31 will be deployed, and following this, the satellite will be put in its final orbital configuration, the space agency said, adding that the satellite will be operational after the successful completion of all in-orbit tests.

Weighing about 2,536 kg, the Indian satellite, GSAT-31, will provide continuity to operational services on some of the in-orbit satellites. The satellite derives its heritage from ISROs earlier INSAT/GSAT satellite series, the space agency said, adding that it will provide communication services to Indian mainland and islands.

GSAT-31 is the country's 40th communication satellite which is configured on ISRO's enhanced 'I-2K Bus', utilising the maximum "bus capabilities" of this type.

This satellite will augment the Ku-band transponder capacity in Geostationary Orbit, ISRO said. With a mission life of around 15 years, GSAT-31 will be used for supporting VSAT networks, Television uplinks, Digital Satellite News Gathering, DTH-television services, cellular backhaul connectivity and many such applications.

The satellite will also be used for bulk data transfer for a host of emerging telecommunication applications," he said in a release. Riding in Ariane-5's upper position, HS-4/SGS-1 was released first in the flight sequence, with its separation occurring about 27 minutes after liftoff.

Comprising two payloads, Saudi Geostationary Satellite 1/Hellas Sat 4, also called HS- 4/SGS-1, is a geostationary condosat for KACST (King Abdulaziz City for Science and Technology Saudi Arabia) and Hellas Sat (Greece Cyprus). HS- 4/SGS-1 will provide telecommunication capabilities, including television, Internet, telephone and secure communications in the Middle East, South Africa and Europe, Arianespace said on its website. GSAT-30 is another geostationary satellite to be lofted soon by Arianespace for ISRO. "Soon we will be getting back to French Guiana some time in June, July to launch GSAT-30," Pandian said.