India   All India  06 Feb 2018  Beating Retreat is a parade, its solemnity must be maintained
India, All India

Beating Retreat is a parade, its solemnity must be maintained

The ceremony/procedure of Beating Retreat denoted the end of the working day, guard mounting and tending to the dead and injured. 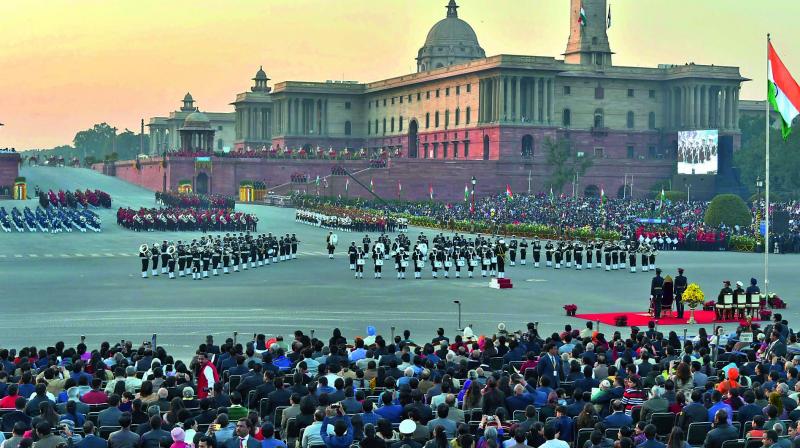 Although nowadays Beating Retreat is purely a ceremonial parade, it originated as an operational necessity in wars of the past. By nightfall, a signal was sent break contact with the enemy/stop fighting, post night sentries and tend to those killed and injured in the day’s battle. In the 16th century, the drum was the primary means of battlefield communications. All signaling was done by the drummer standing close to his commander and simple orders, such as the wake up call at dawn, advance, assemble, stand-to and retreat would be conveyed by set beating or rolls of the drum.

In later years, Beating Retreat developed into a routine event in barrack life. With the bugle replacing the drum as a method of communication in camp, “Retreat” came to be sounded daily at 6.00 pm or sunset. In Scottish Regiments, it became the custom for the Retreat Call “Sunset” to be followed by a single piper playing the Regimental Retreat. The ceremony/procedure of Beating Retreat denoted the end of the working day, guard mounting and tending to the dead and injured. Since the formation of pipe bands in the nineteenth century, the pipes and drums and military bands of regiments joined the ceremony to add spectacle, colour and poignancy to an event of ceremonial significance in the lives of all soldiers. While it is a ceremony with pomp/ pageantry and intricate military drill parade movements to the beat and martial tunes by military bands, evoking pride, what is absolutely intrinsic to it is solemnity.

In the Indian Army, every infantry battalion is authorised a pipes and drums band comprising regular soldiers of the medical platoon. All other corps and regimental centres have brass bands, larger in size as they involve many different musical instruments. Buglers are common to all units. While the calls of Reveille at daybreak and Retreat at sunset are played on the bugle 24x7 to date in all Indian Army units/ formations/ stations/ cantonments/ institutions countrywide, the Beating Retreat ceremony at Vijay Chowk on every January 29 became institutionalised since the 1950s. Choreographed to smart, graceful military drill movements in step with the drumbeats of a composite Army, Navy and Air Force band, it was considered as exemplary spectacular, solemn and overall very impressive not only by Indian military and public but also by foreign armed forces, particularly the British and all Commonwealth countries, all of whose chiefs of missions and defence attaches in  Delhi viewed it.

This writer, as the Indian Army spokesperson in 1993-98 and even after retirement received many requests from foreign media to arrange for passes to witness the Beating Retreat or for video recordings of the same. In 1975, the ceremony was shown live on BBC.

While initially all the martial tunes were British/European, over the years changes towards Indianisation were made with new martial music compositions by Indian military composers and even patriotic songs like Saare jahaan se achhaa, Hindustan hamaaraa and a number of others which jelled well. Kadam kadam badhaye jaa, the song of Netaji Subhas Chandra Bose’s Indian National Army introduced at the behest of former Army Chief and Member of Parliament (Rajya Sabha) Gen. Shankar Roychowdhury in the 1990s, turned out to be quite popular. All these tunes mentioned fitted very well as marching tunes and none of them affected the solemnity or military parade procedure of Beating Retreat. However, since at least 2016, some changes began to be made in Beating Retreat, but the changes seen in the recent 2018 version stood out as deviations, too jarring and totally out of place, leaving the large community of armed forces veterans and serving personnel seething with indignation. While the serving personnel have not expressed their resentment publicly, military veterans countrywide have lambasted whoever responsible for what they have reportedly expressed as “squatting tabalchis, hip-swinging drummers, and Bollywood-style trumpeteers”. 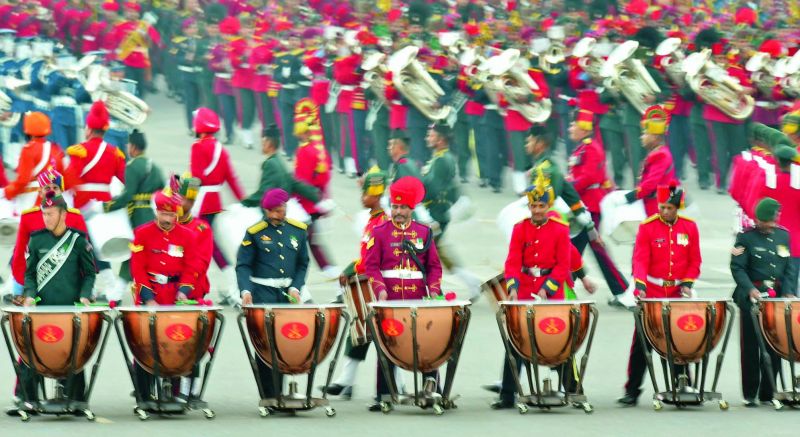 “I am ashamed to say and depressed to see that despite my public objection to the changing of the format two years ago, things have only got worse... Bringing the sitar, tabla, violin are all fine for shows or concerts, not on a military parade. The Retreat is a parade. It has dignity and sanctity. You cannot reduce it to a tamasha,” former Army Vice-Chief Lt. Gen.  was quoted to have said to the media.

Interacting with this writer, Maj. Karun Khanna (Retd), a veteran of 1965 and 1971 wars and the inter-services coordinator for the ceremony from 1974 to 1976. lamented, “I am ashamed that the armed forces allowed this ‘tamasha’. Is this what the globally appreciated Indian armed forces’ Beating Retreat has been reduced to? How can you violate the sanctity and solemnity of this event signifying the valour and sacrifices of our armed forces for seven decades now? It is ridiculous. Today it has been reduced to a ‘nautanki’ with some unrecognisable music, out of tune and disrespectful to the solemnity of a Retreat,” he said.

Indian armed forces bands have regaled audiences all over the country and in foreign friendly countries for years. Their versatility has been proven by all three Services bands having included Indian classical, folk and even film music on Indian musical instruments, but all such music is only played during band displays/ concerts and not/ never in parades. And as far as the post-Independence Day Beating Retreat is concerned, its solemnity must be maintained all the more as Indian Army personnel are being killed at the average of almost one every day in counter terrorist operations in Jammu and Kashmir, the Northeast and in United Nations foreign missions.

India’s image improving in the international arena and the ambit of its strategic/ defence cooperation widening substantially is just one more strong reason for the projection of its armed forces to be correct and impressive. Prime Minister Narendra Modi has not only been praising the role of India’s armed forces in the country, but has also been very visibly involved in honouring Indian military personnel’s sacrifices during World Wars (WW) I and II in foreign countries, where their reputation of the Indian military is very high and being acknowledged even a century later. Since 2014, all Allied nations have been paying tribute to the sacrifices of Indian personnel during WW I.

Whatever deviations mentioned and justifiably much criticised by veterans and discerning public must be removed. Civilian officials in defence ministry’s ceremonials directorate must be well aware of a bit of military history and guiding principles of instituting procedures in military parades/ ceremonies and should not pass instructions which amount to dilution of the important aspect of solemnity. The Army headquarters ceremonials directorate must advise the ministry or raise the level if necessary.

Much good for the Services is being expected from defence minister Nirmala Sitharaman. As the defence minister, a major aspect is her frequent interaction with many of her foreign counterparts. The mentioned deviations seen in the recent years Beating Retreat parades get noticed by the armed forces of all countries, particularly those of Commonwealth, whose attaches in Delhi witness it. The defence minister must ensure that the sanctity of military parades is maintained and that despite their competence, Indian armed forces do not become a laughing stock only because of such visible aberrations in military ceremonials.