The RSS is keen on the NEP as the last policy had been framed around three decades ago, in 1986, under a Congress government. 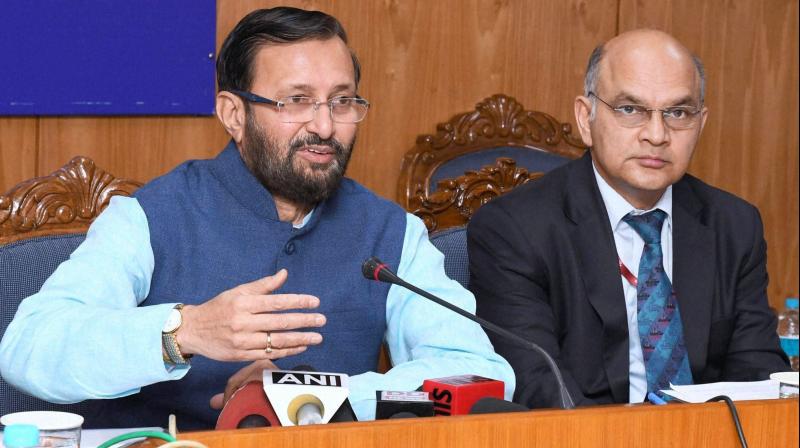 New Delhi: Unwilling to follow in the footsteps of his predecessor Smriti Irani and get branded as a Hindutva hawk, HRD minister Prakash Javadekar is going slow on the much-awaited new National Education Policy (NEP) that is being dictated by the RSS.

Mr Javadekar, who aims to emerge as a moderate face in the BJP, appears reluctant to toe the RSS line and is even delaying the announcement of a committee headed by an eminent educationist to prepare the draft NEP.

Sources said this had caused a lot of heartburn in the saffron camp, with the RSS expressing its unhappiness over the prolonged delay.

The RSS is keen on the NEP as the last policy had been framed around three decades ago, in 1986, under a Congress government. With the Narendra Modi government having an absolute majority in the Lok Sabha, the BJP’s ideological parent feels this is the best opportuinity to leave its indelible mark on the country’s education sector.

While Mr Javadekar repeatedly said, since November last year, that the names of the committee to prepare the draft NEP will be finalised soon, his ministry has failed to shortlist candidates. It is learnt this delay is because the HRD ministry and the RSS aren’t on the same page over its composition. Mr Javadekar is not very keen on finalising the names anytime soon, in order to maintain his non-controversial image, and theefore the NEP is not expected before the end of this year.

Sources said when the committee manages to finalise the draft National Education Policy, it will be put before the Union Cabinet for its approval, and its implementation could well take up to an entire year.

The Subramanian committee report is now only being utilised as an “input in the wider scheme of things in the education reforms”, the sources added.

There are some indications that the report prepared by the committee led by T.S.R. Subramanian, convened during the tenure of former human resource development minister Smriti Irani, has effectively been put in cold storage.