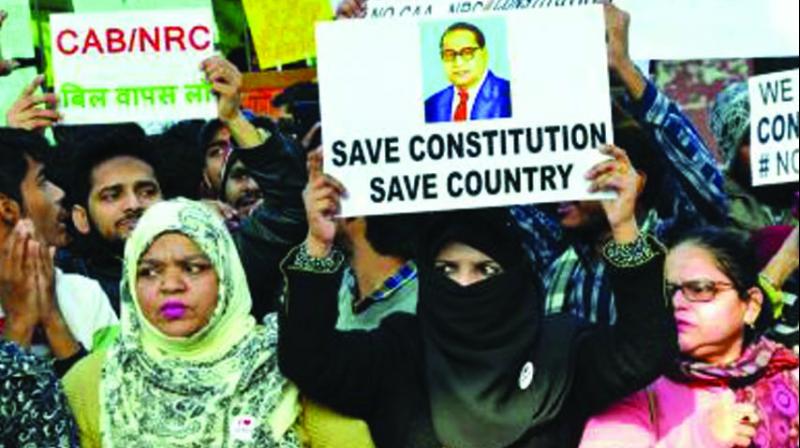 One indication that the NRC and the CAA have so far not affected India-Bangladesh ties is that the border security forces of both nations held their 49th director- general level talks from December 25 to 30, 2019. India’s Border Security Force’s (BSF) delegation was headed by its DG, Vivek Johri, and Border Guards Bangladesh’s (BGB) delegation was headed by its DG, Maj. Gen. Mohammad Shafeenul Islam.

While the nationwide protests against the Citizenship (Amendment) Act (CAA) and the National Register of Citizens (NRC) have proved to be the result of a concerted campaign by the Opposition parties, particularly the Congress, to instigate masses by much use of lies, there has been some apprehension about how these two moves may affect India-Bangladesh relations.

In one of his recent articles, India’s former high commissioner to Bangladesh, Pinak Ranjan Chakravarty, expressed concern over the CAA and its possible fallouts as its passage only allowed illegal migrants other than Muslims to easily obtain Indian citizenship. He is reported to have expressed his anxiety about the possibility of reverse migration, which may encourage Islamists and anti-Indian lobbies in Bangladesh to target Hindu minorities there, besides adversely affecting the bilateral relationship. He stated that: “India has always maintained that the NRC in Assam is a domestic issue whenever concerns were raised in Bangladesh. The NRC undoubtedly is a domestic issue and so is the CAA, which is an amendment to India’s Citizenship Act of 1955. The CAA states that designated non-Muslim persecuted minorities will not be treated as illegal migrants if they have entered India by December 31, 2014, and fast-tracks the grant of Indian citizenship via naturalisation after 6 years.” The Bangladesh government too has reportedly acknowledged that the CAA and the NRC are India’s domestic issues but have rejected the CAA’s provisions that Hindus are a “persecuted minority”. Bangladesh’s leaders have also said that if India provides a list of illegal Bangladeshi immigrants, it will take them back after due verification.

One indication that the NRC and the CAA have so far not affected India-Bangladesh ties is that the border security forces of both nations held their 49th director-general level talks from December 25 to 30, 2019. India’s Border Security Force’s (BSF) delegation was headed by its DG, Vivek Johri, and Border Guards Bangladesh’s (BGB) delegation was headed by its DG, Maj. Gen. Mohammad Shafeenul Islam.

The stretch of this border in Assam was one through which a large number of Bangladeshi illegal immigrants entered and were converted into a vote bank by the Congress ruling in Assam. This was during the tenure of the Bangladesh Nationalist Party, when there was a large strength of Pakistan’s Inter-Services Intelligence (ISI) operatives posted in Bangladesh.

By 1990, the terrorist group United Liberation Front of Asom (Ulfa), who claimed to be engaged in “a liberation struggle against state terrorism and economic exploitation by India for the establishment of a sovereign, independent Assam”, had in fact become nothing but terrorists steeped in large-scale extortion of money from businesspersons, abductions and cold-blooded killings of political leaders, police personnel and innocent people. Ulfa had also penetrated almost all departments of the Assam government under the Asom Gana Parishad, a party which emerged from/after the bloody Assam Agitation against the entry of “foreigners” — mainly Bangladeshi illegal immigrants crossing a porous border.

Towards the end of November 1990, just before the Central government clamped President’s rule in Assam and launched the Indian Army under its Operation Bajrang, top Ulfa leaders, having come to know owing to their penetration in the state government, escaped to Bangladesh, thereby making a mockery of their championing the cause of Assam. In Bangladesh, Ulfa collaborated with Pakistan’s ISI there and provided it the long awaited golden opportunity of penetrating India’s Northeastern region and establishing links with insurgent groups there for anti-India activities.

President’s rule ended in Assam on June 30, 1991, with the Congress coming to power under Hiteshwar Saikia. With Operation Bajrang being stopped before the elections, Ulfa were able to re-group and a couple of days after Saikia’s swearing in as chief minister, Ulfa abducted 14 people from six different parts of the state. Ulfa demanded six of its detenus in exchange for two hostages — Russian engineer Sergei Grischenko and ONGC executive B.N. Jaiswal. On July 8, 1991, Saikia’s newly installed Congress(I) government declared a “general amnesty” for 650 Ulfa detenus rather than just the six, and released 324 of them on July 9, Ulfa’s deadline.

Meanwhile, the Army had to launch a second operation, code-named Rhino, as Ulfa had become active again in Assam and thanks to its leadership in Bangladesh, the ISI there not only established links with other Northeastern insurgent groups like the National Socialist Council of Nagaland/Nagalim-Issac-Muivah (NSCN-IM), the People’s Liberation Army and some others, supplying them with sophisticated arms and in fact converting them from insurgents to terrorists. Apart from supporting them for anti-India activities, including circulation of fake Indian currency, ISI’s master plan for Assam became the stepping up of Bangladeshi illegal immigrants through Ulfa with a long-term aim of altering Assam’s demography. This author’s book Assam: Terrorism and the Demographic Challenge (Centre for Land Warfare Studies, Knowledge World) released in 2008, elaborates on much of what has been mentioned and becomes relevant to refer to again, because by 2008, the demography of eight districts in Assam had altered. Now, at least 11 are affected. Hence the need for NRC.

Short of December 2008, when the Awami League under Sheikh Hasina Wajed won with a massive mandate, the Ulfa and other groups in Bangladesh escaped into Myanmar, with Ulfa making forays into China too. But from 1990 till 2008, there was a concerted drive by ISI and Ulfa for large numbers of Bangladeshi illegal migrants into Assam and settled them in 11 districts at least. Many of these were reportedly issued ration cards by Assam’s Congress ministers with a view to develop a massive vote bank. Also, the Ulfa was of great help to the Congress in Assam by way of “influencing” the public under the threat of their guns to vote for the Congress during successive elections.

The DG level talks between India and Bangladesh, continuing since long, are held twice every year — once each in India and Bangladesh. This time the talks were held in New Delhi as per schedule. The agenda items cover all issues related to the border including smuggling of drugs, gold, fake currency, cattle, action against the remnants of the Indian insurgent groups, construction of fence within 150 yards of IB, developmental works within 150 yards of IB, deaths and injuries to civilians and BSF personnel along the IB, death/injuries to BD civilians, human trafficking and illegal immigration. Discussions were held on each agenda point to make the border guarding more effective despite the difficulties posed by the topography.

After thorough discussion on the agenda points, both sides agreed to adhere to the conclusions reached. Highlights of the Joint Record of Discussions signed by both DGs are:

? To prevent injuries or loss of life to BSF personnel on borders while preventing criminal activities, both forces agreed to make all possible efforts to curb the menace of cattle smuggling or any other criminal activity and to ensure tranquility on the borders.

? Responding to concerns of BGB on death of Bangladeshi nationals on borders, BSF assured that a non-lethal weapon policy is strictly followed by its personnel. Firing is resorted to only in self-defence — when BSF patrols are surrounded and attacked. It was specified that BSF does not discriminate between criminals based on nationality.

? For the camps of Indian insurgent groups in Bangladesh the BGB informed that Bangladesh does not allow its soil to be used by any entities or elements hostile to any country but agrees to take action against miscreants, if there are any.

? Both sides agreed to take strong measures for prevention of illegal border crossings and to intensify the simultaneous coordinated patrols in vulnerable areas.

? On smuggling of drugs, narcotics, arms, etc, both sides reviewed the steps being taken for prevention and agreed for sharing of real time information, if any, including relevant information of apprehended criminals.

? Sharing the importance of a coordinated border management plan in dealing with issues related to the border security grid, it was reiterated that joint mapping of vulnerable areas would be done according to crime statistics and trends.

Both sides expressed their satisfaction over the deliberations in the conference, which was meaningful and cordial, reflecting the friendly bilateral relations between the two countries. Both sides agreed for expeditious implementation of the decisions taken in the conference.