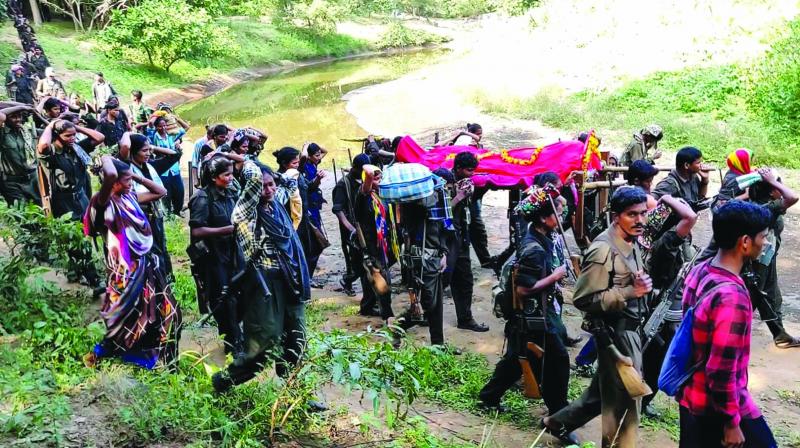 Bhopal: Nearly three weeks after the death of the secretary of Dandakaranya Special Zonal Committee (DKSZC), Ramanna alias Ravula Srinivas, the Maoist leadership is yet to find his replacement leaving local Naxal leaders and cadres in the region, particularly in Bastar in Chhattisgarh, anxious.

That it is proving a challenging task for the Maoist leadership to find Ramanna’s replacement can be gauged from the fact that two central committee (CC) members—Ramakrishna, currently the secretary of Andhra Orissa Border committee, and Ganesh Uike alias Saka Hanumanthu, who has been elevated as DKSZC member and made West Bastar Divisional Committee and southern regional unified command last year—of the outlawed outfit have declined the offer to head the DKSZC citing their advancing age.

“The development clearly indicates that Maoists are facing serious challenge from security forces to retain their fast shrinking base in Dandakaranya region, particularly in Bastar in Chhattisgarh,” Bastar range inspector general of police P. Sunderraj told this newspaper.

Other top rung Maoist leaders, who are in the contention for the crucial post of strategic zone of DKSZC, which generates revenue to the tune of `300 crore per annum in the form of extortions for the outlawed outfit, included Tippri Tirupati alias Devji, the secretary of the Central Military Commission (CMC); Raju alias Vijaya Juru, the secretary of North sub-zonal bureau; and K. Rama Chandra Reddy, who has recently been promoted from East Bastar Divisional Committee in-charge to DKSZC member.

In another development, Madkam Hidma, a Naxal leader hailing from Sukma district in South Bastar, who currently commands the first battalion of CPI (Maoist), has staked claim to the post, intelligence reports said.

“Hidma held a meeting of local Maoist leaders including commanders of platoons under his battalion in the village of Sakler under Kistaram police station in South Bastar district of Sukma on December 13 to chalk out the future course of action in wake of the death of Ramanna,” intelligence reports, accessed by this newspaper, revealed.

“He stands a remote chance of replacing Ramanna as secretary of DKSZC considering his position in the Maoist hierarchy,” an expert, in the know of the developments in the Maoist circle, told this newspaper.

“While the next big figure among Maoists in South Bastar is clearly Hidma, who has cultivated a persona much like Ramanna did in his early days, security agencies feel his identity as a tribal may be a drawback,” a senior police officer of Chhattisgarh said.

“It is difficult for the central committee members of CPI (Maoist), all of whom are from Andhra Pradesh and Telangana, to accept a leader from Chhattisgarh,” he added.

Ramanna died at Pallaguda in Sukma district on December 7 and was cremated at Betlenka in the district two days later.