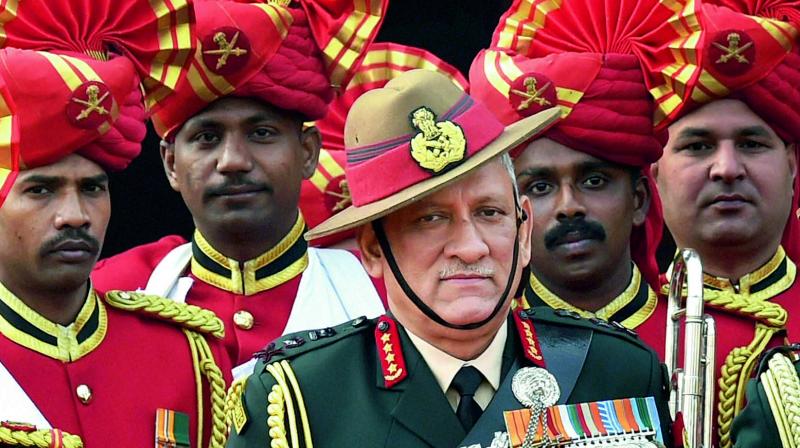 Srinagar: Army Chief Bipin Rawat has said he is concerned at the rising number of Kashmiri youth joining militancy, adding that a shift in the counterinsurgency strategy is being planned to target “false propaganda” rather than individuals alone.

Gen. Rawat began on Thursday a 3-day visit of Jammu and Kashmir, his first outside New Delhi after he took charge as Army Chief earlier this month.

“False propaganda and developments in the Middle East have affected some of the local youth, and that is why one finds more and more educated youth getting driven towards militancy,” he told PTI.

“When the local youth…pick up the gun, it is a matter of concern because our own countrymen getting involved in insurgency is not a happy situation,” Gen. Rawat told the news agency.

The Army Chief, who has served in J&K, is scheduled to visit all the three regions of the border state, the Valley, Jammu and Ladakh, besides the Line of Control (LoC) and Siachen glacier. He is also likely to hold one-on-one meetings with governor N.N. Vohra and chief minister Mehbooba Mufti during his visit.

Defence spokesperson Colonel N.N. Joshi said that the Army Chief would hold security review meetings with senior local commanders. He will also visit Army formations in Kupwara, Anantnag, Akhnoor and Rajouri where he will be briefed about the prevailing security situations in these areas.

At the LoC, he is scheduled to interact with officers and jawans, and obtain facts of operational preparedness along the de facto border that has recently seen rising skirmishes between facing troops and infiltration bids by militants.

The Army carried out in September last year surgical strikes across the LoC, and Gen. Rawat said soon after taking over as the Army Chief on January 1 that it would not hesitate in doing it again to wipe out anti-India terror infrastructure across the border.

He, however, said that any such action would be of “a different manner and different style”, and that “We will surprise the enemy.”

The Army under him in all probability will also act harder against militants in the hinterland, and while doing so, try to benefit from the experiences Gen. Rawat has gained over the years in counterinsurgency campaigns in the Valley, sources said.

Gen. Rawat lauded the Army’s role towards restoring peace and normalcy in the Valley, which witnessed its worst civil unrest in many years in the aftermath of the killing of militant commander Burhan Wani, Col. Joshi said.

“He also commended the soldiers for strongly responding to the unprovoked ceasefire violations by Pakistan,” he said. “He (Gen. Rawat) emphasised that we need to evolve a dynamic strategy to handle the proxy war and defeat the enemy’s nefarious designs,” he said.

Ms Mufti told the Assembly in Jammu earlier this week that since the killing of Wani on July 8 last year, as many as 59 local youth have joined militant groups.

Gen. Rawat questioned if the local youth in Kashmir were getting into insurgency because of feeling of deprivation, which he said was happening in other areas.

He also said that it was important to understand as to why local militancy was gaining ground. “…A lot of propaganda has been generated by some of the unwarranted Islamic organisations who are trying to interpret Islam in a very incorrect manner with inaccuracies,” he said.