President was addressing the governors and lieutenants governors through video-conferencing from Rashtrapati Bhavan. 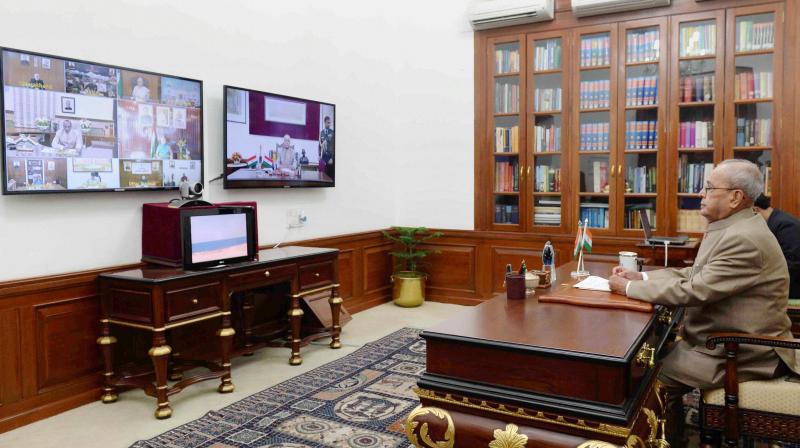 New Delhi: In his first remarks on the scrapping of old Rs 500 and Rs 1,000 banknotes, President Pranab Mukherjee warned on Thursday that the government’s demonetisation drive might lead to a temporary slowdown of the economy. The President said that extra care must be taken to alleviate sufferings of the poor triggered by economic slowdown which has become unavoidable after demonetisation.

“Demonetisation, while immobilising black money and fighting corruption, may lead to a temporary slowdown of the economy. We all will have to be extra careful to alleviate suffering of the poor which might become unavoidable for the expected progress in the long term,” said the President. He was addressing the governors and lieutenants governors through video-conferencing from Rashtrapati Bhavan.

Mr Mukherjee said that while he appreciated the thrust on transition from entitlement approach to an entrepreneurial one for poverty alleviation, “I am not too sure that the poor can wait that long.”

“They need to get succour here and now, so that they can also participate actively in the national march towards a future devoid of hunger, unemployment and exploitation. The recent package announced by the Prime Minister will provide some relief,” said the President.

The scramble for cash caused a string of deaths, prompting an unrelenting Opposition attack on the government and disrupting an almost entire Parliament session. Mr Modi had promised to restore normalcy by the end of the year, but long queues have stayed outside low-on-cash banks and ATM kiosks.

Mr Mukherjee said that 2016 was a year of mixed fortunes. He asked the governors and lieutenant governors to play an important role in easing tensions in the society. “Goodwill must prevail between different communities. At times, harmony may be put to test by vested interests. Communal tensions may rear their ugly head. Rule of law must form the sole basis of dealing with any such challenging situation,” he said.

The President pointed out that in a pluralistic democracy like “ours, tolerance, respect for contrary views and patience are a must. These values have to be preserved.” He said that India was a multi-faceted nation of 1.3 billion people, 122 languages, 1,600 dialects and 7 religions.

Quoting India’s first Prime Minister Jawaharlal Nehru, Mr Mukherjee said that the country’s strength lay in her diversity. “The multiplicity in culture, faith and language is what makes India special. There will always be divergent strands in public discourse. We may argue. We may disagree. But we cannot deny the prevalence of multiplicity of opinion. You can, through your calm influence, inculcate amongst the citizens of your state this fundamental ethos of our civilisation.”