Ad says not safe for kids, Coke in damage control

Coca Cola spokesperson Ishteyaque Amjad, however, said “the product is safe for children.” 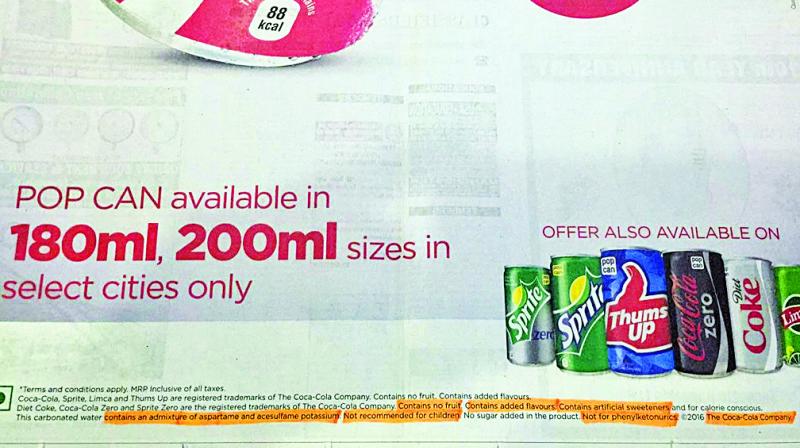 All carbonated drinks have to declare their contents and in India.

New Delhi: World’s largest beverage company —Coca Cola — is busy in a face saving exercise these days. A recent faux pas in their advertisement, declaring that their products —Coke, Sprite, Thums Up and Limca — are not “recommended for children” have put them on the spot. While this “safety warning” is mandatory for those products that contain “artificial sweeteners” like Diet Coke and Coke Zero, the advertisement had all the variants, including those which do not contain artificial sweeteners. The sloppy marketing blunder has now gone viral on social media, pushing the senior management of the company to run a campaign clarifying their stand.

All carbonated drinks have to declare their contents and in India, those beverages that contain artificial sweeteners have to carry a “safety warning” that “it is not recommended for children.” This include all the “diets and lights” beverages like diet coke, Coca Cola zero among others. These beverages contain artificial sweeteners —which is a food additive that is an artificial sugar substitute, provides a sweet taste like that of sugar while containing less food energy. The government made it mandatory for the beverage companies to add the warning with a rationale that children need sugar and not sugar substitutes and hence it should not be recommended for children.

Coca Cola spokesperson Ishteyaque Amjad, however, said “the product is safe for children.”

“The way this advertisement has appeared, it has confused the consumers. This ad has all the products and the warning doesn’t apply to them.”

While Coca Cola is yet to ascertain if this faux Pas has affected its sales, the news has traveled far with infuriated customers both in India and abroad started asking for clarifications. “There have been queries from both India and abroad. While we don’t envisage an impact on our sales. The news definitely has traveled far and has created a confusion,” added Mr Amjad.