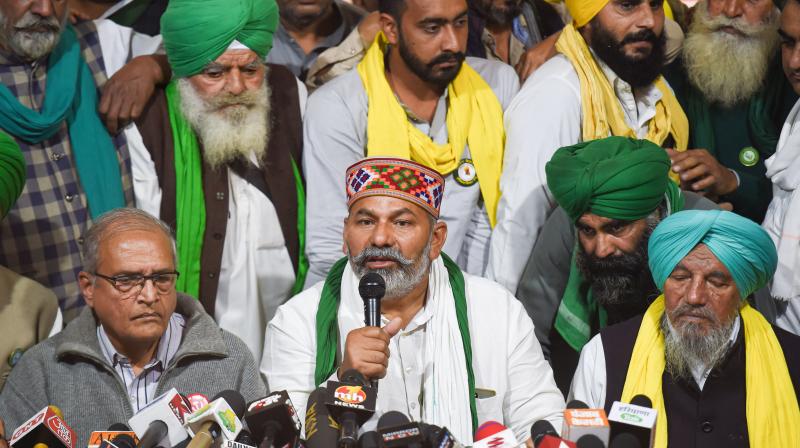 New Delhi: Samyukt Kisan Morcha, the outfit that is leading the farmers' protest, on Saturday formed a five-member committee to talk to the Modi government. The Centre on Tuesday had demanded five names from the SKM to form a panel to deliberate on MSP and other issues.

Several farmer leaders had gathered near the Singhu border on Saturday to discuss and deliberate upon the future course of the agitation. SKM leaders, after the meeting, said they will not move from the Singhu Border here until cases filed against farmers are withdrawn and demanded an assurance in writing.

Bharatiya Kisan Union leader Rakesh Tikait announced that, "It'll be the authorised body to talk to the government. The committee will have Balbir Singh Rajewal, Shiv Kumar Kakka, Gurnam Singh Charuni, Yudhvir Singh and Ashok Dhawale. Next meeting of SKM will be on 7 December."

Farmer leaders  had said on Friday that any decision on whether to send five names to the Centre for a panel on MSP will be taken in the meeting as they have not yet received any formal communication from the government.

The farmers, however, concurred that SKM need not send any names for the panel, and "the MSP guarantee should be given".

Farmer leader and SKM member Ashok Dhawle said that the issues of compensation to be given for martyred farmers, "false cases" lodged against farmers and Lakhimpur Kheri incident were discussed in the meeting.

The farmers' protest against the new farm laws passed by the Modi government has been going on for over a year now. It started in November last year.

Prime Minister Narendra Modi on the birthday of Guru Nanak had announced that the farm laws would be repealed. On the first day of the Winter session of Parliament on 29 November, a bill was passed without any opposition to repeal the farm laws. But the stalemate continues as the farmers' other demands, such as legal guarantee on MSP, compensation to families of farmers who died during the movement and withdrawal of cases against them, are still to be met.

During the meeting, members also discussed pending demands of the protesting farmers which include legal guarantee on minimum support price (MSP) of crops, withdrawal of cases against farmers, compensation to kin of farmers who lost their lives during the agitation.