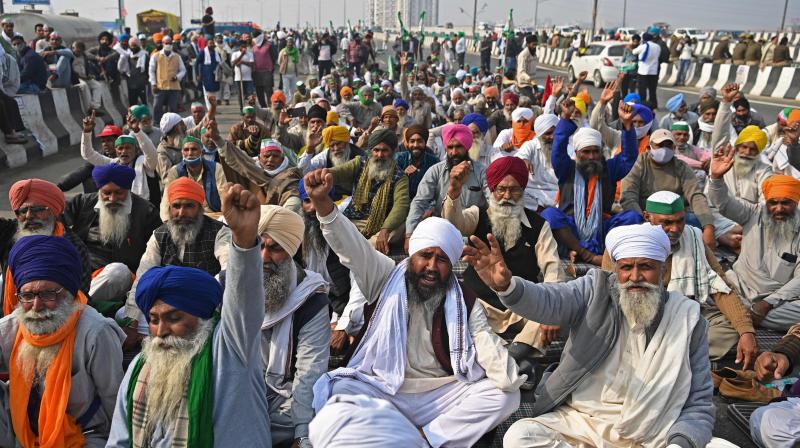 Farmers shout slogans during a protest against the central government’s recent agricultural reforms at the Delhi-Uttar Pradesh state border in Ghazipur on December 5, 2020. (AFP)

New Delhi: Upping the ante, farmers protesting against the Centre's new farm laws on Friday announced a Bharat bandh on December 8 and threatened to intensify their agitation and block more roads leading to the national capital if the government does not accept their demands.

This hardening of stand came a day ahead of the fifth round of talks with the government.

According to sources, the government has worked out possible solutions to the provisions on which the farmer leaders have raised objections in a bid to break the deadlock.

Farmer leaders held a meeting during the day to decide the future course of action. Addressing a press conference later, one of the leaders Gurnam Singh Chadoni said if the Centre on Saturday does not accept their demand of repealing the three farm laws, they will intensify their agitation.

"In our meeting today, we have decided to give a Bharat bandh call on December 8 during which we will also occupy all toll plazas," said Harinder Singh Lakhwal, general secretary of Bharatiya Kisan Union.

"We have planned to block all roads leading to Delhi in the coming days if the farm laws are not scrapped," he also said.

He said that farmers will protest against the central government and corporate houses and burn their effigies on Saturday, adding that on December 7, sportspersons will return their medals in solidarity with the farmers.

The farmer leaders stuck to their demand that the Centre call a special session of Parliament to repeal the new farm laws, adding that the protestors do not want amendments but their scrapping.

Agriculture Minister Narendra Singh Tomar will lead the government side, also comprising Food Minister Piyush Goyal and Minister of State of Commerce and Industry Som Parkash, in the crucial round of talks on Saturday.

In the previous meeting on Thursday, Tomar had assured 40 farmer union leaders that the government is open to considering ways to strengthen APMC mandis, create a level-playing field with proposed private markets, and provide a provision for approaching higher courts for dispute resolution, while asserting that procurement at minimum support price (MSP) will continue.

But the other side stuck to their demand of repealing the three "hastily-passed" farm laws, saying that the legislations with several loopholes and deficiencies cannot be amended.

Bharatiya Kisan Union leader Rakesh Tikait said the farmers are hoping that the government will meet their demands during the fifth round of talks.

"The government and the farmers did not reach any decision during the meeting held on Thursday. The government wants to make amendments to the three laws, but we want the laws to be completely repealed..." Tikait told PTI.

Meanwhile, Finance Minister Nirmala Sitharaman said the farm reform legislations were brought in after elaborate stakeholder consultations and a lot of homework, and will benefit farmers. Asserting that the reforms were not done in a jiffy, she said the agriculture minister is meeting farmers with an open mind and hoped that a solution will be found soon.

Throughout the day, Delhi's border points remained choked as thousands of farmers from Haryana, Punjab, and other states held demonstrations for the ninth consecutive day. Traffic moved at snail's pace at several border points of the national capital as police kept key routes connecting Delhi to Haryana and Uttar Pradesh closed.

A senior police officer said that the situation at Chilla and Ghazipur borders remained peaceful, adding that tight security arrangements are in place as part of precautionary measures.

Farmers staying put at the Chilla Border between Delhi and Noida performed a 'havan' on a partially closed highway and offered prayers wishing "good sense" for the government.

The farmers' groups continued to garner support from various quarters with West Bengal Chief Minister Mamata Banerjee assured them that her party TMC stands by them.

The Indian National Lok Dal said the government should listen to the farmers and expressed its willingness to join any front floated by the Shiromani Akali Dal for their cause.

The Rashtriya Janata Dal in Bihar said it will take out a demonstration in Patna on Saturday in protest against the agriculture bills.

Party leader Tejashwi Yadav said the dharna will be "held at Gandhi Maidan, in front of the statue of Mahatma Gandhi whose vision is under attack from the proposed legislations which intend to give a leeway to big private players in agriculture sector".

In Delhi, India summoned Canadian High Commissioner Nadir Patel and told him that the comments made by Prime Minister Justin Trudeau and others in his cabinet on the farmers' protest constituted an "unacceptable interference" in the country's internal affairs and these actions, if continued, will have a "seriously damaging" impact on the bilateral ties.

Enacted in September, the three farm laws have been projected by the government as major reforms in the agriculture sector that will remove the middlemen and allow farmers to sell anywhere in the country.

However, the protesting farmers have expressed apprehension that the new laws would pave the way for eliminating the safety cushion of Minimum Support Price and scrap the mandis, leaving them at the mercy of big corporates. The Centre has repeatedly asserted that these mechanisms will remain.